TOOELE COUNTY, Utah (KSTU) — A man was arrested Tuesday after police say he admitted to killing his ex-girlfriend and dumping her body in a remote area of Tooele County.

On Friday, the Tooele County Sheriff’s Office received a report that someone had found a dead body in the Five Mile Pass area, a popular location for off-roading.

Deputies responded and confirmed that the body was that of a young woman, but there was no identification. They processed the scene and collected evidence, some of which helped them arrest an alleged accomplice in the case. 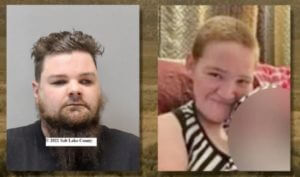 The body of Brooklyn Tyree, 23, was found in the remote Utah desert. Her ex-boyfriend Brandon Zipperle, 28, has been arrested. (Salt Lake County Sheriff’s Office)

The sheriff’s office had been contacted that same day by the Salt Lake City Police Department regarding 23-year-old Brooklyn Tyree, who was reported missing.

The two agencies worked together, and based on security camera footage from Tyree’s apartment building in Salt Lake City earlier that week, they matched the clothes she was wearing to those on the body and concluded that it was her.

The footage from May 3 showed Tyree and her 7-month-old child getting into a vehicle with 28-year-old Brandon Zipperle — her ex-boyfriend and the father of the child.

Police brought Zipperle in for an interview and secured search warrants for his apartment and his vehicle.

According to Tooele County Sheriff Paul Wimmer, Zipperle admitted to shooting and killing Tyree. Court documents state that an autopsy concluded that Tyree was shot. He also admitted to pawning the gun he used and disposing of Tyree’s personal belongings.

When searching his apartment, police said they found a shoe that matched a footprint at the scene where Tyree’s body was found. The shoe belonged to Zipperle’s fiance, 28-year-old Elizabeth Ludwig, who was also brought in for questioning. Ludwig admitted that she helped Zipperle to move Tyree’s body and get rid of some of her personal property.

Police said both of them made these confessions after being informed of their Miranda rights.

Police also wrote in a probable cause statement that both suspects’ phones were in the Five Mile Pass area on May 3.

Tyree’s baby boy is in the custody of the Utah Division of Child and Family Services.

On Monday, former Salt Lake City mayor Rocky Anderson sent a letter to SLCPD Chief Mike Brown and SLC Mayor Erin Mendenhall, in which he called the department’s response to Tyree’s case an “outrageous failure and refusal… to investigate.” He said he was doing so as “a friend and personal advocate” of the family, not as legal counsel.

In the 10-page letter, Anderson accused officers of being “rude, indifferent, and dismissive” to Tyree’s family and friends.

Mendenhall sent the following statement to FOX 13 News in response:

“My heart goes out to Brooklyn’s family and friends. I cannot imagine what they are going through right now. We will continue collaborating with the Tooele County Sheriff’s Office investigation and pursue justice for Brooklyn.

“Any accusations of misconduct leveled at our police department must be taken seriously, and I’ve directed that our independent Police Civilian Review Board review these allegations immediately, including any associated body worn camera footage. The facts matter.”

The police department also issued a statement and a timeline of their investigation:

The Salt Lake City Police Department takes all community complaints seriously. This is a tragic case and our condolences go out to the family and friends of Brooklyn Tyree.

“To ensure our investigation into the missing person’s case was professional, respectful, thorough, and in line with our community’s expectations, we will comprehensively review the steps taken by our department. We welcome and will fully cooperate with the Salt Lake City Police Civilian Review Board with any requests they have pursuant to the Mayor’s direction for this independent body to review these allegations.

“The Salt Lake City Police Department is fully cooperating with the Tooele County Sheriff’s Office on their suspicious death investigation.

This story was originally published May 10, 2022 by KSTU in Salt Lake City, an E.W. Scripps Company.