SAN JOSE, Calif. (AP) — Once-lionized entrepreneur Elizabeth Holmes wrapped up seven days of testimony in her criminal fraud trial Wednesday, having largely used the time to defend her actions as CEO of the startup Theranos. The company she founded had soared on the promise of innovative blood-testing technology only to crash in a sordid display of failure and alleged deceit. 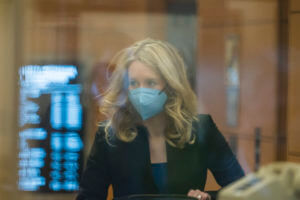 Elizabeth Holmes walks into federal court in San Jose, Calif., Monday, Nov. 22, 2021. Holmes is accused of duping elite financial backers, customers and patients into believing that her startup was about to revolutionize medicine. (AP Photo/Nic Coury)

Holmes alternately took responsibility for her missteps as CEO and cast herself as the abused victim of her former lover and business partner Sunny Balwani. She also repeatedly said she couldn’t recall her actions at key points even when confronted with internal documents including her own emails.

Here are five takeaways from the trial to help you catch up as both sides prepare for closing arguments next week, after which the case will be in the hands of the jury.

ALLEGATIONS OF RAPE AND ABUSE

Holmes’ pivotal moment came last week when she revealed that she had been raped during her freshman year at Stanford University, a traumatic event that she testified was later exploited by Balwani, the company’s chief operating officer.

She depicted herself as a tortured soul who was ruthlessly manipulated by Balwani, a previously successful technology entrepreneur nearly 20 years her senior.

After presenting a terse, handwritten instruction guide that she said Balwani demanded she follow, Holmes testified that he managed everything from her diet to her friendships. Far worse, Holmes claimed that Balwani abused her emotionally and sexually during their 11 -year stealth romantic relationship, which continued while they ran Theranos together from 2009 until she ousted Balwani from the company in May 2016.

Holmes’ self-depiction as Balwani’s pawn represented a radical departure from the image she had carefully crafted for the media and in public presentations. Mostly flattering articles published during 2013 and 2014 cast her as a brilliant entrepreneur on the verge of revolutionizing health care with a device that she said could scan a few drops of blood for hundreds of potential diseases and infirmities. At the company’s peak, Holmes’ ownership stake was valued at $4.5 billion.

Balwani faces his own trial over Theranos’ collapse next year. His lawyer has emphatically denied Holmes’ claims of abuse.

To David Ring, an attorney who has represented victims of alleged sexual abuse and has been following the trial closely, Holmes’ testimony was “an incredibly risky move.”

“Defendants usually only take the stand if they think they are losing the case, or if they are winning by so much that they think they can keep piling it on,” he said. “This case is going to turn on whether the jury buys that Elizabeth Holmes was mentally, verbally and sexually abused by Sunny Balwani.” 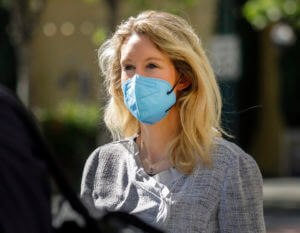 Although she seemed to have no problem recalling the tumultuous times she experienced with Balwani, Holmes’ memory became much foggier while she was being grilled by government prosecutor Robert Leach about key events at Theranos that led to its downfall.

Holmes so frequently struggled to remember what happened that Leach fell into a refrain, frequently pulling up internal Theranos documents, including Holmes’ own emails, in an attempt to “refresh” her memory about key incidents.

“Jurors pick up on what seems like selective memory,” Ring said.

Prodded in part by some of the testimony she heard from other witnesses in the trial, Holmes repeatedly acknowledged she mishandled a variety of issues while running Theranos. She admitted, for instance, that she shouldn’t have added logos of Pfizer and other established drug makers to Theranos reports, which other witnesses testified made them think the company’s technology had been validated by major industry players when it hadn’t been.

Holmes expressed some of her deepest remorse for brushing off warnings from two former Theranos employees, Erika Cheung and Tyler Shultz, who were raising red flags about the wildly inaccurate results produced by the company’s testing device, called the Edison. Holmes later authorized attempts to intimidate them with threats of legal action after they became whistleblowers and sources for a series of Wall Street Journal articles that disclosed the flaws in Theranos’ technology.

Without explicitly apologizing, Holmes said she regretted trying to mislead the Journal reporter, John Carreyrou, as he was investigating the company. She also admitted she shouldn’t have tried to convince media mogul Rupert Murdoch, the Journal’s owner and a major investor in Theranos, to block the story from being published. “We really messed up,” she conceded.

Carreyrou, who also wrote a book about Holmes’ downfall, was sitting in the back of the courtroom throughout her testimony in a position where she could see him. .

When pressed about her seemingly furtive behavior at Theranos, Holmes framed her actions as an attempt to protect trade secrets rather than as a cover-up of the Edison’s flaws. One “invention,” according to Holmes, included a new way to process small amounts of blood on conventional testing machines made by Siemens instead of the Edison — the very technology she had publicly touted for years as Theranos’ equivalent to the formula for Coca-Cola. 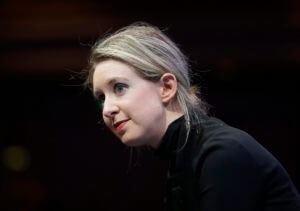 When Theranos secretly began testing blood on Siemens machine, Holmes testified she even sought advice from the company board about whether that approach should be treated as a trade secret. The board, she noted, included former Sen. Sam Nunn, a former board member at Coca-Cola — making him someone familiar with the importance of protecting trade secrets, she suggested.

WHERE THE BUCK STOPS

Holmes also spent a good deal of time trying to deflect the blame for the problems with Theranos’ technology. Most of her finger pointing aimed at Balwani and the company’s former lab director, Adam Rosendorff, who spent six days on the stand testifying about his attempts to make her aware of the serious problems he was seeing before he quit in late 2014.

But Leach also got Holmes to acknowledge that she had by far the most power at Theranos, given that she was the private company’s controlling shareholder as well as chief executive.

“Is that fair? The buck stops with you?” Leach asked her at one point.

“I felt that,” Holmes replied.