The effort is part of an executive order signed by President Joe Biden earlier this month aimed at protecting access to abortion after the Supreme Court struck down Roe v. Wade, the landmark 1973 ruling that established a constitutional right to the procedure. 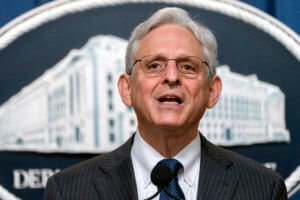 FILE – Attorney General Merrick Garland speaks during a news conference at the Department of Justice, June 13, 2022 in Washington. Garland told reporters Wednesday, July 19, that “we do not do our investigations in public,” and in explaining his silence on the question, called the Jan. 6 probe “the most important investigation that the Justice Department has ever entered into.” (AP Photo/Jacquelyn Martin, File)

Among the issues the attorneys will discuss at the Friday afternoon event are: travel for abortions, what to do when women are denied the procedure and criminalization of the practice, according to the White House.

Biden has said he cannot, on his own, restore access to abortion nationwide and has been calling on voters to elect to Congress this fall a sufficient number of Democrats who could then vote to codify the rights of Roe v. Wade. But his administration has come under significant pressure from advocacy groups to use his executive powers, including declaring a public health emergency on abortion.