MARINETTE, Wis. (AP) — An 84-year-old man was convicted Tuesday of murder in the 1976 shootings of a couple camping in a northeast Wisconsin park, wrapping up a case that grew cold over more than four decades until DNA technology led to an arrest.

A jury in Marinette County returned verdicts soon after beginning deliberations in the trial of Raymand Vannieuwenhoven. 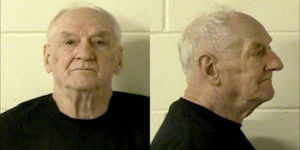 He was charged with two counts of first-degree murder in the deaths of David Schuldes, 25, and Ellen Matheys, 24, at McClintock Park.

Sentencing was scheduled for Aug. 26.

The counts are punishable by life in prison, but WLUK-TV reported that Judge James Morrison asked attorneys from both sides to offer briefs outlining opinions on how the sentencing should proceed.

The murders of Schuldes and Matheys were unsolved for more than four decades. In 2019, a DNA sample from evidence at the crime scene was determined to be from a particular family. After samples tested from Vannieuwenhoven’s brothers weren’t a match, a sample from him — obtained from a licked envelope for a survey on police performance filled out by Raymand — was a match, according to a criminal complaint.