WINNETKA, Ill. (AP) — A white woman charged with a hate crime following a confrontation where she told a group of Black men in 2020 that they couldn’t be at a suburban Chicago beach has been sentenced to probation after pleading guilty to a lesser charge.

The felony hate crime charge Irene Donoshaytis had faced in Cook County was amended Wednesday to misdemeanor battery under a plea agreement. She pleaded guilty to the battery charge and was sentenced to one year of probation. 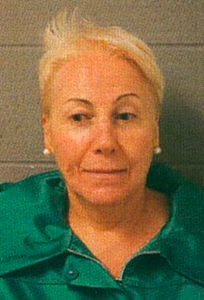 FILE – This booking photo provided by the Winnetka Police Department, shows Irene Donoshaytis, 65, who was charged with felony hate crime on Sept. 2, 2020, after she aggressively confronted Otis Campbell and two other Black people who were bicycle riding near a pier in Winnetka, Ill. Donoshaytis has been sentenced to probation after pleading guilty to a lesser charge. The felony hate crime charge Donoshaytis had faced in Cook County was amended Wednesday, Oct. 19, 2022, to a misdemeanor battery under a plea agreement. (Winnetka Police Department/Chicago Tribune via AP, File)

The Northfield, Illinois, woman’s plea agreement includes a requirement that she attend an anti-racism class, the Chicago Sun-Times reported.

Donoshaytis, then 65, was accused in August 2020 of aggressively confronting Otis Campbell and two other Black men who were riding bicycles near a pier along Lake Michigan in Winnetka, police said.

Campbell captured the interaction in a video that was uploaded to Twitter.

In the video, Donoshaytis complains to a Winnetka Park District employee that the three Black men didn’t belong in a certain area without a pass. The employee responds that the men were on public property and a beach pass wasn’t required.

Donoshaytis disagrees. She asks Campbell, “Are you crazy? What, you want to kill me? No? It feels like it.”

“Why would I want to kill you? Is it because I’m Black?” Campbell says.

After that, Donoshaytis tries to knock the phone out of Campbell’s hands, and the recording shakes and stops. Campbell said she hit his arm twice.

Campbell said the woman confronted him just after he finished a 15-mile (24-kilometer) bike ride with his cousin and friend from the nearby suburb of Skokie, where Campbell says he grew up.

Donoshaytis’ attorney, Jeffrey Fagan, said in 2020 that Donoshaytis was a refugee from the Soviet Union who fled persecution there.