NORTH OLMSTED, Ohio (WEWS) — A 35-year-old woman was taken into custody Tuesday for a laundry list of alleged crimes that happened at a local Walmart, North Olmsted police said.

It happened just after 2 p.m. at the Walmart on Brookpark Road.

Officers responded responded to the store for a theft complaint involving two people—the woman and a 44-year-old man. 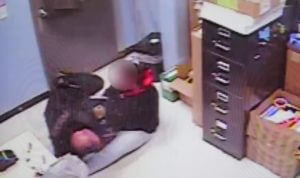 Officers searched the man and found a homemade firearm or “zip gun.” After being searched, the man was placed in a cruiser while the woman remained inside the store’s loss prevention office, police said.

While inside, the woman told officers she was pregnant and was handcuffed with her arms in front of her. Police said that the woman lunged at an officer’s gun while he was collecting property and a struggle ensued. During the melee, the woman gouged an officer’s face in multiple spots.

During a search of the man and woman’s vehicle, police found a “significant amount of suspected” methamphetamine, police said.

Additionally, the woman later told officers that she was not actually pregnant. She also gave police a fake name instead of her real name.

The officer was treated at a nearby hospital for their injuries and then released.

The man and woman have been charged with robbery. Additional charges are pending.

This story was originally published Jan. 13, 2022, by WEWS in Cleveland, an E.W. Scripps Company.