GRAIN VALLEY, Mo. (AP) — A Missouri grand jury indicted a man and woman on a first-degree murder charge alleging they strangled a woman and dismembered her body, the Jackson County prosecutor announced Monday. 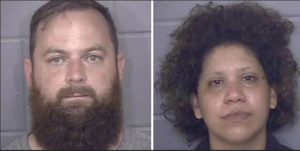 “Our community owes greatly a child victim in this case who came forward and alerted police of the gruesome criminal activity detailed in these charges,” Prosecutor Jean Peters Baker said in a statement. “Without her bravery, we might not know today Kensie Aubry’s fate.”

Hendricks’ lawyer in an email said he remains “steadfast in our determination to represent Mr. Hendricks with a robust defense.”

The teenage girl, who was in foster care, told police that Hendricks confessed to choking the woman and putting her body in a freezer. The girl said Hendricks showed her photos of a naked and bound woman and the chainsaw he allegedly used to chop up her body.

Ybarra was arrested in late April and jailed on sexual abuse charges related to the teenage girl, The Kansas City Star reported. Police alleged that Ybarra called Hendricks from jail and asked him to throw away evidence at her house.

Ybarra is also charged with multiple crimes related to tampering with a victim. According to charging documents, Ybarra attempted to get other people to buy gifts for the teenage girl and pressure her to take back what she told police.

Police said Ybarra met Hendricks after he paid her for sex sometime last year. Ybarra has described Hendricks as both her boss and her boyfriend to police.

Hendricks’ wife filed for divorce within days of his June arrest.