COLUMBIA, S.C. (AP) — Twenty-nine inmates have been charged in connection with a South Carolina prison riot that left seven inmates dead and 22 injured in 2018, the state’s attorney general announced Thursday.

The charges were filed against the inmates at Lee Correctional Institution in Bishopville, Attorney General Alan Wilson said at a news conference. He said three of the inmates were charged with murder, while others are facing charges including first-degree assault and battery by a mob resulting in death. 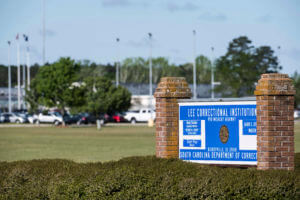 FILE – This Monday, April 16, 2018, file photo, shows a sign outside the Lee Correctional Institution in Bishopville, S.C. South Carolina’s attorney general says 29 inmates have been charged in connection with a riot at the facility in 2018 that left seven inmates dead and 22 injured. (AP Photo/Sean Rayford, File)

The nearly eight hours of killings and chaos at the prison in April 2018 constituted the nation’s deadliest prison riot in nearly 25 years. All 1,200 inmates were put on lockdown for weeks after the unrest at the high-security prison, which houses violent offenders and inmates with demonstrated behavioral issues.

Prosecutors said the violence that night erupted between rival gangs after an inmate was killed. Gang members at the prison then retaliated against the inmate who killed him, The Post and Courier reported. The use of illegal cellphones to communicate led to the “mob riot,” Wilson said.

“The reason we are here today is because of these cellphones,” Department of Corrections Director Bryan Stirling said at Thursday’s news conference. The phones are “essentially a weapon in inmates’ hands,” he said.

A state audit had found multiple failures by prison officials in their handling of the violence the night of the rioting. Stirling said last year that he had implemented security measures to detect cellphones brought in either by visitors or inmates.

Third Circuit Solicitor Ernest Finney III called the investigation into the riot “very complicated.” He said inmates had destroyed the prison’s videotaping system so as to eliminate evidence.

Some inmates were reluctant to share what they’d seen, fearing retribution, and others refused to cooperate or destroyed evidence, officials said. The indictments that were issued by the state grand jury were “done professionally and took a long time,” Finney added.

Authorities have held open the possibility of additional charges arising from their investigation.

MeaSporadic violence has continued to vex the prison, located about 55 miles (90 kilometers) east of the state capital of Columbia. An inmate was killed two weeks ago at the prison and an officer was stabbed there earlier this year.