LOS ANGELES (AP) — A California man who spent 21 years in prison for a gang murder he said he didn’t commit has been declared factually innocent by a judge, authorities announced Wednesday.

Alexander Torres appeared at a news conference with Los Angeles County District Attorney George Gascón and members of the California Innocence Project, which fought for his exoneration. 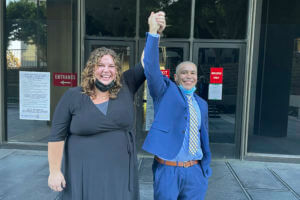 “Torres was so young when he was convicted of a crime he did not commit. He deserves a chance to start to really live his life,” said attorney Audrey McGinn from the California Innocence Project. “I’m so excited to see Alex reunited with his family and loved ones.”

Torres was a 20-year-old member of a Compton street gang when he was accused of jumping out of a car and shooting a rival gang member, Martin Guitron, in suburban Paramount on Dec. 31, 2000.

Guitron was shot eight times with a handgun.

Torres was arrested on Jan. 18, 2001. He told investigators he’d had confrontations with Guitron, including a fight after his mother’s car was vandalized, but did not leave his house the night of the killing, court records indicated.

Relatives testified that Torres injured his hand in the fight with Guitron several weeks earlier. At the time of the shooting, he had a broken finger and a cast on his arm from his elbow almost to his fingertips.

Torres was convicted on June 12, 2001 of second-degree murder with an allegation that he personally used a gun during the crime. He was sentenced to 40 years to life in state prison.

In 2006, however, a private investigator hired by Torres’ brother interviewed the driver of the getaway car, who said Torres wasn’t at the shooting scene and that another man committed the killing, according to a court filing.

Last October, Torres was released from prison after a judge set aside his conviction at the request of Torres and the Conviction Integrity Unit of the district attorney’s office, which cited “newly discovered evidence” that someone else committed the killing.

That person, identified only as Individual 2 in the court filing, is serving prison time for a series of armed robberies committed after the shooting, prosecutors said.

In April, the district attorney’s office and the Innocence Project asked a judge for a finding of “factual innocence” in the case, arguing jointly that “there is not a single reliable or credible piece of evidence that Torres committed the crime” and that, in fact, “a preponderance of the evidence” shows that he is innocent. The motion was granted.

Prosecutors said they were investigating to gather enough evidence to charge the real shooter.