ANCHORAGE, Alaska (AP) — A rural Alaska man who threatened to kill the state’s two U.S. senators in a series of profanity-laced voice messages left at their offices in Washington, D.C., has pleaded guilty to making the threats in exchange for having other charges dropped. 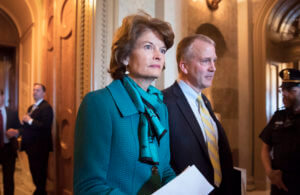 Johnson, who has been in custody since his arrest Oct. 4, has asked for an earlier sentencing.

He faces up 10 years in jail on each charge and will be under a protective order for three years not to contact either U.S. Sens. Lisa Murkowski or Dan Sullivan, any of their family members or staff.

He also must forfeit two pistols, three revolvers, a shotgun and a rifle found at his home in the small community of Delta Junction. He’s not legally able to own handguns because he’s a felon for repeated drunken driving convictions.

In exchange for his guilty plea to the two counts, the government agreed to drop four other charges against Johnson, including making interstate threats and threatening to damage property by fire or explosives.

“Threatening public officials in an attempt to interfere with the performance of their duties is antithetical to our democratic system of governance,” John E. Kuhn Jr., the U.S. attorney for the District of Alaska, said in a statement. “To protect the functions of our government institutions and our public officials themselves, the Department of Justice will work to ensure our elected officials can serve without fear of harm.”

Johnson was charged after leaving 17 threatening voicemail messages between April and September, as outlined in both Johnson’s indictment and in the plea agreement.

In one message left Sept. 2 for Murkowski, he said, “You, my dear, are not welcomed in the state of Alaska,” and vowed to shut her down.

He then claimed he could tap his skills as a “veteran,” using a .50 caliber shell.

“You ever seen what that does to a human head?” he said.

Prosecutors said they found no evidence that Johnson served in the U.S. military, confirming what the services earlier told The Associated Press, that they could find no record for him.

Later that month, he left another voicemail for Murkowski, claiming he would hire an assassin for $5,000 to kill her. “Just resign or get the f— gone,” he said.

In another September call, this time to Sullivan’s office, Johnson said he was tired of politicians continuing to destroy the country. He again vowed to get his “.50 caliber out. I will be having a GoFundMe page for f—— shells. And I’m coming with a vengeance.”

Messages seeking comment left Tuesday for both senators and Johnson’s attorney were not immediately returned.

During several court appearances, and often against the advice of his attorney, Johnson spoke in open court.

At one hearing, Johnson said he is “a senior citizen and I am highly disabled and I will not be carrying out any of these threats.”

“I just apologize to everybody,” he said later at the same hearing.

Catherine Pousson-Johnson testified during her husband’s detention hearing in October that he was recovering from recent surgeries.

“He’s in pain right now. My husband is an old man, and he gets very angry listening to politics on the news,” she said.

Federal prosecutor Ryan Tansey later asked her if she was aware her husband was making threats against two U.S. senators.
“Who hasn’t?” she replied.