TAMPA, Fla. (WFTS/AP) — A warrant for former Tampa Bay Buccaneers wide receiver Antonio Brown has been issued, and Tampa Police spent at least an hour trying to get him to come out of the house.

At one point, Tampa Police yelled at Brown, “we’re not going anywhere.”

The arrest warrant comes after Tampa Police were denied a temporary ex parte risk protection order for Brown. In the protection order request, Tampa Police alleged Brown “poses a significant danger of causing personal injury to him or herself or others in the near future and beyond by having a firearm or any ammunition in their custody or control or by purchasing, possessing, or receiving a firearm or any ammunition.” 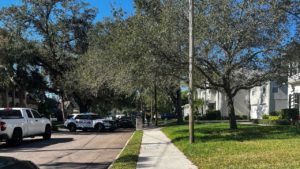 Tampa police are on the scene outside former Tampa Bay Buccaneers wide receiver Antonio Brown’s home. A warrant for his arrest was released Dec. 1. 2022. (WFTS)

Tampa Police said in the protection order request that Brown had access to two guns, including one handgun he carries.

According to the affidavit attached to the protection order request, TPD said Brown,

The protection order request, and arrest warrant, came after an incident between Brown and the mother of several of his children on Wednesday.

During the previous incident, Tampa Police said Brown began throwing the woman’s belongings out of the house. At some point before police arrived, Brown allegedly came out of the home and “threw a shoe at the victim striking her in the ponytail.” 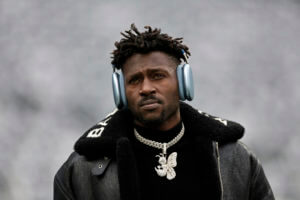 By the time police arrived, Brown had allegedly locked all of the doors and windows to the home and refused to come out.

TPD said Brown offered to let the children go inside the home, “but the kids did not want to go inside because they were afraid of their dad when he gets in these destructive moods.”

Police said they made multiple attempts to get Brown to open the home but were never successful. According to TPD, Brown had placed an informal eviction notice on the door and repeatedly said the woman had no right to be at or enter the home.

The woman eventually left with her children and was told by Tampa Police to “spend the night at a hotel or friends (sic) house and just let suspect cool down and not try to have any contact with him for a few weeks as not to instigate the situation any further while law enforcement action is taken.”

Brown’s contract with the Tampa Bay Buccaneers was terminated a few days after he tossed his equipment into the stands and left in the middle of a Jan. 2, 2022, game.

Brown had said he was pressured to play injured, but then-Tampa Bay coach Bruce Arians said Brown was upset about not getting the ball enough.

Brown has a long history of troubling behavior on and off the field, including being accused by two women of sexual assault, one of whom said Brown raped her.

In the 2021 season, he served a three-game suspension for misrepresenting his COVID-19 vaccination status. He was also suspended for eight games in 2020 for multiple violations of the NFL’s personal conduct policy.

This story was originally published Dec. 1 by WFTS in Tampa, an E.W. Scripps Company.