LAUDERHILL, Fla. (AP) — Police are looking into reports that the mother of two young girls found dead in a South Florida canal was offering to baptize people in the canal a day earlier. 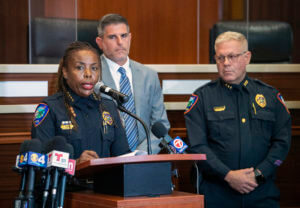 Lauderhill police Lt. Mike Bigwood identified the sisters during a Wednesday evening news conference as 7-year-old Daysha Hogan and 9-year-old Destiny Hogan. Investigators identified the girls’ mother, Tinessa Hogan, as a possible person of interest. She has been taken into custody, but no criminal charges have been filed.

Destiny’s body was spotted Tuesday afternoon outside a condominium complex in Lauderhill, which is near Fort Lauderdale. Daysha’s body was found just before 9 p.m., not far from where the first body was located.

Bigwood confirmed that the family had lived in the area where the bodies were found. There were no records of child welfare workers responding to the home.

At first, authorities did not suspect foul play because the first girl showed no signs of trauma. After the first body was found, detectives walked the length of the canal that runs behind the Habitat II Condominiums but did not find anything else. Then, at 8:45 p.m., police received a 911 call from someone who spotted the second child’s body.

On Tuesday afternoon, detectives knocked on doors in the neighborhood, asking neighbors for help. Several residents told investigators about a woman, later identified as Tinessa Hogan, who was offering to baptize people in the canal on Monday. The girls were last seen near the canal with their mother Monday evening, Bigwood said.

Lawna Johnson, 51, told the SunSentinel she was sitting near the canal Tuesday when she spotted the body in the water.

”It’s just upsetting,” she said. “I see things on TV; I ain’t never seen something real like that.”

Amon Hilt, who is the father of three daughters, told WSVN the second girl’s body was found after he arrived home Tuesday night.

He said one of his daughters has a shirt like the second child found was wearing.

“I have three little girls and it’s tragic. I ran upstairs real quick and I hugged them,” he said.