SAVANNAH, Ga. (AP) — A Georgia judge Friday denied bond for the father and son charged with murder in the February slaying of Ahmaud Arbery, saying he’s concerned the white men took the law into their own hands and endangered neighbors when they pursued and shot the Black man in a residential street.

Travis McMichael and his father, Gregory McMichael, have been jailed since their arrests in May, more than two months after Arbery was slain. The McMichaels armed themselves and chased 25-year-old Arbery in a truck after they spotted him running in their neighborhood just outside the port city of Brunswick.

Defense attorneys for the McMichaels say the men had legal rights to go after Arbery because they had reason to suspect he was a burglar. They also contend Travis McMichael was defending himself when he blasted Arbery three times with a shotgun, because cellphone video of the shooting shows Arbery punching him and grappling for the gun. 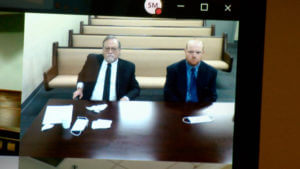 Prosecutors say Arbery was no criminal but was merely out jogging and the McMichaels acted as “vigilantes” motived by racist views. They also showed the judge photos of a home near the shooting scene that was damaged by gunfire.

“You can interpret the video in a number of different ways,” Superior Court Judge Timothy Walmsley told attorneys while denying the men bond at the hearing Friday, “But the video tells me there’s a significant risk and danger to the community.”

Questions about whether racism played a role in the killing sharpened during a previous hearing when an investigator testified that a third defendant, who took cellphone video of the shooting, told authorities he heard Travis McMichael, 34, utter a racial slur after he blasted Arbery three times with a shotgun.

The friend, Zachary Langford, at first said he didn’t recall receiving the message. After reviewing a transcript of the exchange on the witness stand, he said: “He was referring to a raccoon, I believe.”

Defense attorneys for both McMichaels have denied any racist motives in the shooting. 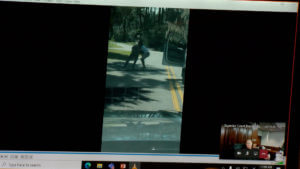 Cell phone video of the shooting of Ahmaud Arbery is seen during a Nov. 13, 2020, bond hearing for the three defendants. (Court TV)

The McMichaels weren’t arrested until the cellphone video of the shooting leaked online and the Georgia Bureau of Investigation took over the case. In June, a grand jury indicted both McMichaels and a neighbor, William “Roddie” Bryan, on charges.

In seeking bond, defense attorneys for the McMichaels said neither would flee or pose a threat of further violence. They cited Travis McMichaels’ decade as a U.S. Coast Guard mechanic as proof of his character.

Lee McMichael, the wife of 64-year-old Gregory McMichael, testified that her husband had never shot anyone after working three decades as a Glynn County police officer and an investigator for the Brunswick Judicial Circuit district attorney’s office .