BALTIMORE (Court TV) — A suspended Baltimore City Police officer has been charged with the murder of his 15-year-old step-son.

Police were originally called to the home for a child custody dispute. 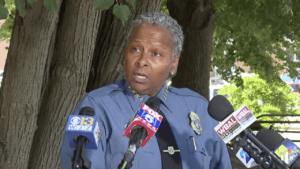 DJ’s mother was unable to contact her son over the phone, and believed Banks was keeping him from leaving. When questioned about his step-son’s whereabouts, Banks claimed he’d already left the house. After getting permission to search the home, police found a hole in the attic with a white cover over top it.

Banks told police it was his gun safe and tried to interfere with officers as they tried to look inside. That’s when police noticed a body. It was DJ’s. Banks was immediately placed under arrest.

While trying to put him in the backseat of a patrol car, police say Banks considered taking an officer’s gun from their holster. Officers finally regained control of the scene.

During the struggle, Banks reportedly said “my life is over, choke me.”

Investigators later recovered clothing belonging to DJ that appeared to be blood stained.

At the time, police were only able to charge Banks with assault and other crimes related to the physical encounter with officers.

Police haven’t released a motive in the case, but confirmed they’ve been called to the home multiple times in the past.

Officers were wearing body worn cameras during the incident, although Anne Arundel County Police Chief Amal Awad said there are no plans to release it publicly.

“This is absolutely a heartbreaking, traumatic, and horrific case,” said Awad. “We continue to lift DJ and our asset, the community does the same his family in prayer as our hearts ache for his grieving mother and his younger siblings, our hearts also go out to all who loved him.”

She described him as one who “took great pride and excelled in his academics, he was a magnet student, and was an accomplished violinist.”

“The alleged actions of Officer Banks are not only deplorable, but shocking to the conscience. This is a classic example of why I have advocated for the autonomy and authority to terminate officers when they are facing heinous criminal allegations,” said Harrison. “Our department will continue to work closely with the Anne Arundel County Police Department during this ongoing investigation.”

Banks is currently being held without bail and is suspended from the Baltimore Police Department without pay.

This story was originally published July 14, 2021, by Ryan Dickstein of WMAR in Baltimore.