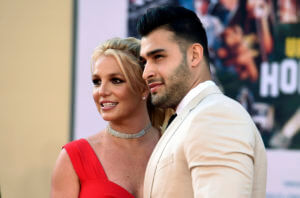 FILE – Britney Spears and Sam Asghari arrive at the Los Angeles premiere of “Once Upon a Time in Hollywood,” at the TCL Chinese Theatre, Monday, July 22, 2019. Spears and her partner Asghari announced in a joint post on Instagram, Saturday, May 14, 2022, that they had lost their baby during pregnancy. The announcement came a little over a month after the couple revealed they were expecting a child. (Photo by Jordan Strauss/Invision/AP, File)

Ventura County Sheriff’s Capt. Cameron Henderson said officers responded to a trespassing call after 2 p.m. Thursday. He says the pop singer’s first husband, Jason Alexander, was detained at the site of the ceremony.

Henderson says Alexander was arrested after officers noticed he had a warrant for his arrest in another county.

Alexander went on his Instagram live when he approached the event security. In what appeared to be a mostly empty but decorated room, he told them Spears invited him.

“She’s my first wife, my only wife,” said Alexander, who was briefly married to Spears — his childhood friend — in 2014. Their marriage lasted only 55 hours.

“I’m her first husband,” he continued in the video. “I’m here to crash the wedding.”

Spears was previously married to Kevin Federline, with whom she shares two sons, ages 14 and 15.

Spears and her fiancé Sam Asghari were reportedly expected to marry on Thursday. The couple announced their engagement nearly nine months ago, after Asghari proposed with a four-carat diamond ring.

The couple met on the set of the “Slumber Party” music video in 2016.

A representative for Spears did not immediately return a request for comment.