SAN FRANCISCO (AP) — A California man who spent more than three decades behind bars for a murder he did not commit was exonerated of the crime Monday, clearing the way for his release from prison, officials said.

Joaquin Ciria, who is now 61, was arrested in 1990 and convicted of a shooting death in San Francisco based on false witness testimony and police misconduct, said San Francisco District Attorney Chesa Boudin, who dismissed the case against Ciria on Monday after a judge overturned his conviction. 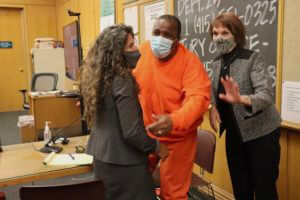 Ciria’s case marked the first exoneration prompted by the District Attorney’s Innocence Commission, which was established by Boudin in 2020 to review potential wrongful conviction cases.

“Thirty-two years ago, you were taken away from your wife and your baby, and that is because the system failed you catastrophically,” Lara Bazelon, chair of the commission, said during a news conference alongside Boudin and members of Ciria’s family. “Now at long last, you have a chance to take back your life.”

Ciria was convicted of first-degree murder and sentenced to life in prison for the shooting death of Felix Bastarrica, who was shot in the head after an argument in a San Francisco alley.

An 18-month investigation by the commission located new witnesses and evidence and found “a cascade of errors” in how the case was handled, including police coercion of the key witness, who was a teenager at the time, said Bazelon, a professor at the University of San Francisco School of Law.

“There was no DNA, no fingerprints, no murder weapon was ever recovered,” she said, adding that Ciria had always maintained his innocence and had two alibi witnesses who said he was home at the time of the murder but were never called by the defense, possibly because they only spoke Spanish. “Had a jury heard this case today there would not have been a conviction.”

The timing of Ciria’s release was not immediately known, Boudin’s office said.

“Mr. Ciria has been in prison for more than 30 years for a crime he did not commit,” Boudin said. “Today we celebrate long overdue justice, but we cannot stop working to undo other wrongful convictions.”