MINNEAPOLIS (AP) — Former Minneapolis Police Officer Derek Chauvin appears to be on the verge of pleading guilty to violating George Floyd ‘s civil rights, according to a notice sent out Monday by the court’s electronic filing system.

The federal docket entry shows a hearing has been scheduled for Wednesday for Chauvin to change his current not guilty plea in the case. These types of notices indicate a defendant is planning to plead guilty. The court system also sent out instructions for media to attend the hearing. 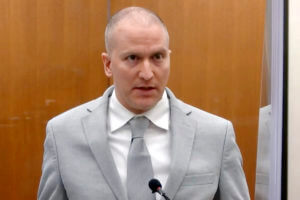 FILE – Former Minneapolis police Officer Derek Chauvin addresses the court as Hennepin County Judge Peter Cahill presides over Chauvin’s sentencing at the Hennepin County Courthouse in Minneapolis June 25, 2021. Chauvin appears to be on the verge of pleading guilty to violating George Floyd’s civil rights. A federal docket entry on Monday, Dec. 13, 2021 showed that a hearing has been scheduled for Wednesday for Chauvin to change his current not-guilty plea in the case. The court system also sent out instructions for media to attend the hearing. (Court TV via AP, Pool, File)

Chauvin has already been convicted of state murder and manslaughter charges for pinning his knee against Floyd’s neck as the Black man said he couldn’t breathe during a May 25, 2020 arrest. He was sentenced to 22 1/2 years in that case.

He and three other former officers — Thomas Lane, J. Kueng and Tou Thao — were set to go to trial in late January on federal charges alleging they willfully violated Floyd’s rights.

A message left with Chauvin’s attorney, Eric Nelson, was not immediately returned. The U.S. Attorney’s Office had no comment.

The information sent out Monday gives no indication that the other officers intend to plead guilty. Messages left for attorneys for Kueng and Thao were not immediately returned. Earl Gray, the attorney for Lane, is currently in a trial in the unrelated case involving the fatal police shooting of Daunte Wright.

According to evidence in the state case against Chauvin, Kueng and Lane helped restrain the 46-year-old Floyd as he was on the ground — Kueng knelt on Floyd’s back and Lane held down Floyd’s legs. Thao held back bystanders and kept them from intervening during the 9 1/2-minute restraint.

Floyd’s arrest and death, which a bystander captured on cellphone video, sparked mass protests nationwide that called for an end to racial inequality and police mistreatment of Black people.

All four officers were charged broadly in federal court with depriving Floyd of his rights while acting under government authority, but the federal indictment broke down the counts even further. A count against Chauvin alleged he violated Floyd’s right to be free from unreasonable seizure and from unreasonable force by a police officer.

Thao and Kueng are charged with violating Floyd’s right to be free from unreasonable seizure by not intervening to stop Chauvin as he knelt on Floyd’s neck. All four officers are charged for their failure to provide Floyd with medical care.

Specifically, the indictment says Chauvin kept his left knee on Floyd’s neck even though he was handcuffed and not resisting. The indictment alleges Thao and Kueng were aware Chauvin had his knee on Floyd’s neck, even after Floyd became unresponsive, and “willfully failed to intervene to stop Defendant Chauvin’s use of unreasonable force.” All four are charged with willfully depriving Floyd of liberty without due process, including the right to be free from “deliberate indifference to his serious medical needs.”

It was not immediately clear if Chauvin plans to plead guilty to all or some of the federal charges against him in connection with Floyd’s death.

Chauvin is also charged in a second indictment, stemming from the use of force and neck restraint of a teenage boy in 2017.

That indictment alleges Chauvin deprived the then-14-year-old boy, who is Black, of his right to be free of unreasonable force when he held the teen by the throat, hit him in the head with a flashlight and held his knee on the boy’s neck and upper back while he was prone, handcuffed and not resisting. Information from the court gave no indication that Chauvin would be changing his plea in that case.

The three other officers were also charged in state court with aiding and abetting murder and manslaughter. They are scheduled to go to trial in the state case in March.
___
Find AP’s full coverage of the death of George Floyd at: https://apnews.com/hub/death-of-george-floyd