DENVER (KOAA) – A Colorado woman who was the girlfriend of a man who pleaded guilty to being inside the U.S. Capitol building during the Jan. 6 insurrection was arrested Tuesday on charges of her own tied to the same events.

Jennifer Horvath faces federal charges of knowingly entering or remaining in a restricted building or grounds without lawful authority; disorderly and disruptive conduct in a restricted building or grounds; disorderly conduct on Capitol grounds; and other offenses on capitol grounds, according to a criminal complaint and an arrest warrant signed and issued by a U.S. District Court for the District of Columbia judge issued on March 10. 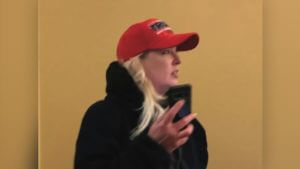 Court records show she was arrested Tuesday and made her first appearance in the U.S. District Court of Colorado in Denver, after which her case was transferred to the District of Columbia and she was released on a personal recognizance bond with specific terms.

According to the complaint, Horvath was at the time the girlfriend of Glen Wes Lee Croy, who pleaded guilty last August to parading, demonstrating or picketing inside the Capitol on Jan. 6 – a misdemeanor. He was sentenced in November to 90 days of house arrest along with 14 days in a community correctional facility. It is unclear if the two are still together.

When a tipster first sent information that Croy and another man had been posting about being seen in videos inside the Capitol on Jan. 6, they also included images of a blonde woman wearing a red hat who was with the two of them that day inside the Capitol, according to the complaint. 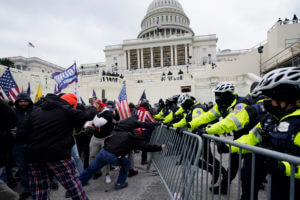 FILE – Trump supporters try to break through a police barrier at the Capitol in Washington on Jan. 6, 2021. (AP Photo/Julio Cortez, File)

Federal Bureau of Investigation (FBI) agents linked Croy and Horvath through her Facebook name and text messages Croy had sent to a group chat about going to Washington that day to “fight the commies.”

During the investigation, agents also obtained videos from Croy’s phone showing the two of them together inside the Capitol.

After Croy pleaded guilty last August, he told investigators Horvath drove with him to Washington for the Jan. 6 events and admitted they both unlawfully entered the Capitol, according to the complaint. Last November, a former coworker of Horvath’s also told investigators that Horvath was the woman seen in screenshots of videos inside the Capitol.

The FBI also subpoenaed Google and Facebook records that showed her phone was inside the U.S. Capitol that day, an FBI agent wrote in the complaint.

As part of her bond, Horvath will not be able to carry a firearm or travel outside of the U.S. without court permission, and is supposed to stay away from Washington D.C. except for court-related matters, according to documents filed Tuesday afternoon.

This story was originally published May 4, 2022 by KOAA in Colorado Springs, an E.W. Scripps Company.