BALTIMORE (WMAR) — The deaths of three Baltimore City firefighters back in January have now been ruled homicides. 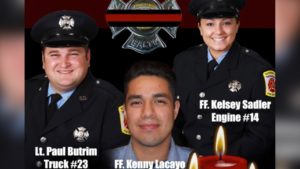 Investigators never specifically said that the fire was set intentionally before Wednesday. However, the ATF has had a reward available for information that leads to an arrest in this case. There’s surveillance video of a man seen in that neighborhood the night before the fire. The ATF now says that man has been identified and no additional tips from the public are needed. That man’s name has not been released.

ATF continues to seek the identity of a person of interest who was near the scene of S. Stricker St fatal fire the evening before it occurred.
$100,000 combined reward from ATF @MayorBMScott @GovLarryHogan @BaltCoExec @BCFDL734 @officers964 for info that leads to ID. 888-ATF-TIPS pic.twitter.com/Y7c9PBSPY0

The ATF along with Baltimore City’s Fire Department, Baltimore Police Department and Office of the State Fire Marshal are investigating this fire and classified it as “incendiary.” That means someone set the fire knowing it should not have been set.

The ruling that the three firefighter deaths were homicides brings the total number of murders in Baltimore City this year to 91 from 88.

The case remains an ongoing investigation.

This story was originally published April 13 by WMAR in Baltimore, an E.W. Scripps Company.