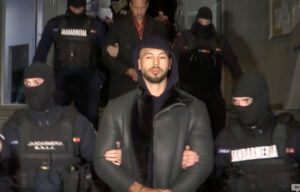 In this grab taken from video released by Observator Antena 1, Social Media personality Andrew Tate is led away by police, in the Ilfov area, north of Bucharest, Romania, Thursday, Dec. 29, 2022. Romanian news outlets are reporting that divisive social media personality Andrew Tate has been arrested on charges of human trafficking and rape. The reports say Tate and his brother Tristan were detained late Thursday. Romania’s anti-organized crime agency said two British citizens and two Romanians are accused of being part of an organized crime group, human trafficking and rape. (Observator Antena 1 via AP)

Tate, a British citizen who previously was banned from various social media platforms for expressing misogynistic views and hate speech, was detained late Thursday along with his British brother Tristan in the Ilfov area north of Romania’s capital, Bucharest. Two other suspects, who are Romanian, were also in custody.

All four will be held for 30 days during an investigation after a judge extended their initial detention period of 24 hours, said Ramona Bolla, a spokesperson for Romanian anti-organized crime agency DIICOT. Bolla said the decision wasn’t final and that all four suspects have already appealed the extension, which is unlikely to be heard in court before next week.

DIICOT said in a statement late Thursday that the four suspects in the case were arrested on charges of being part of an organized crime group, human trafficking and rape.

The agency said the British citizens recruited women who were subjected to “acts of physical violence and mental coercion,” sexually exploited by group members and forced to perform pornographic acts intended to reap “important financial benefits.”

DIICOT said it identified six people who were sexually exploited by the organized criminal group, and that five homes were raided on Thursday.

On Friday, Andrew Tate, who is known to express various conspiratorial views, tweeted that “The Matrix sent their agents,” without elaborating.

Earlier this week, Tate posted a video on Twitter of a mountainous region of Romania, the Eastern European country where he is reported to have lived for the last five years.

Tate also was embroiled this week in a war of words with 19-year-old climate activist Greta Thunberg after he tweeted a picture of himself standing next to a Bugatti and bragged that he owned 33 cars.

Police said that 11 luxury cars were discovered in the raids that were owned or used by the suspects.

Bolla, from DIICOT, refuted widespread claims in the media that an address brandished on a pizza box that featured in a video posted by Andrew Tate on Twitter earlier this week led authorities to his arrest. She said the claims are “funny, but no.”