ST. ALBANS, Vt. (AP) — A fired Vermont deputy sheriff who is the only candidate on the November ballot to become sheriff is continuing to insist he did nothing wrong when he was recorded on surveillance video kicking a handcuffed and shackled prisoner. 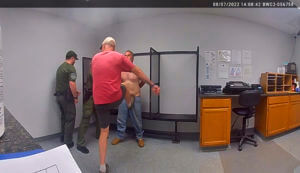 In this surveillance video provided by the Franklin County sheriff’s office, then-Sheriff Department Capt. John Grismore, at center wearing shorts, apparently kicks a handcuffed and shackled detainee in the groin, Sunday Aug. 7, 2022, in St. Albans, Vt. Grismore, who is the only candidate on the November ballot to become sheriff, was fired from his job by the current sheriff. The county prosecutor asked the state police to investigate the incident. Two others are now mounting a write-in campaign for the post for sheriff. Grismore has said he did nothing wrong. (Franklin Co., Vt. Sheriff’s Department via AP)

John Grismore won the nomination of both Franklin County’s Republican and Democratic parties to have his name on the November ballot, but after the video became public in August he was suspended and then fired.

Now his bid to become sheriff has lost the support of both parties, which have thrown their support to a write-in candidate. Grismore says the kicks were needed to protect himself and two other deputies from the prisoner who had been spitting at them.

“We were horrified by the video of John Grismore brutalizing a handcuffed detainee,” Franklin County Democratic chair Zach Sheffler said in an email. “Grismore has since been fired, condemned by both parties, and remains under criminal investigation. He cannot continue to credibly campaign for this office.”

The video, which was publicized Aug. 10, shows the unidentified prisoner sitting in a holding area at the Franklin County sheriff’s department in St. Albans. At one point the prisoner moves forward and falls on his face after which two deputies help him to his feet, and move him back to the bench where he had been sitting.

A state police criminal investigation into the Aug. 7 incident continues and once completed, will be referred to the county prosecutor for possible charges. Meanwhile the current sheriff, who called the case “egregious,” referred the case to the Vermont Criminal Justice Training Council, which could revoke Grismore’s certification as a law-enforcement officer. 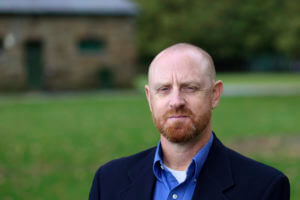 Franklin County Sheriff candidate John Grismore poses for a photo, Friday Oct. 7, 2022, in St. Albans, Vt. Grismore, the only candidate on the November ballot to become sheriff, is continuing to insist he did nothing wrong when he was recorded on surveillance video kicking a handcuffed and shackled prisoner. Meanwhile the county Republican and Democratic parties are backing a write-in candidate. (AP Photo/Wilson Ring)

Grismore says his actions, caught on surveillance video two days before Vermont’s primary election, were taken out of context. He kicked the prisoner, who kept standing up, because he allegedly had spit at the deputies and he was preparing to spit again. He used his foot so he wouldn’t need to get close to the prisoner.

Grismore, a Franklin County native who has worked in a variety of law enforcement and corporate security jobs since 1997, including the past four years full-time for the sheriff’s office, has refused to drop out of the race.

In the immediate aftermath of the incident, one of the deputies reported it to her superiors and outgoing Sheriff Roger Langevin, who had been out of state. Langevin returned to Vermont and three days later suspended Grismore with pay. He said in a news release the case had been referred to the county prosecutor and the state police were investigating.

Now, after a month of quiet, Grismore has been making his case that he did nothing wrong with a series of television appearances and media interviews.

“The bottom line was I was defending myself from being spit upon and defending another deputy from the potential of being spit upon,” Grismore said during an appearance on Northwest Access Television. “That’s the bottom line and I used the minimum amount of force necessary to affect creating some space and time between him and myself, and a maneuver using my foot to try to keep my face away from his face.”

Sheriff’s department Lt. Mark Lauer, a 27-year Vermont State Police veteran who has been at the department for nearly a decade, has been endorsed by both parties. He said he hadn’t considered running for sheriff until he was approached by others after the Grismore case became public.

“I just felt that at that point the time was right and it was the right thing to do for the agency,” said Lauer, who wouldn’t talk about the investigation into Grismore’s actions because he’s directly involved in it.

Scheffler said Lauer, a Republican, is a competent law enforcement leader with a distinguished record and bipartisan support.

“While he is not a Democrat, our committee’s majority determined we could not let Grismore run unchallenged,” he said.

The other candidate is Gale Messier, who has worked for decades in law enforcement, including 20 years at the sheriff’s department in Chittenden County, Vermont’s most populous county.

Corey Parent, a state senator and chair of the county Republican Party, said mounting a successful write-in campaign is difficult and it’s more so with two candidates.

“It’s so hard just to get the name ID and to get the efforts out there,” Parent said. “And you know, every vote that doesn’t go to Mark Lauer, who I think will have the most support, really is a vote for John Grismore, unfortunately.”

Grismore, who has not been charged with a crime and is still a certified law enforcement officer, could be elected.

John Campbell, the executive director of the Department of State’s Attorneys and Sheriffs, said the office had no oversight of the elected sheriffs.

“The only official oversight for criminal behavior for an elected official such as the sheriff would be impeachment by the Legislature,” said Campbell. 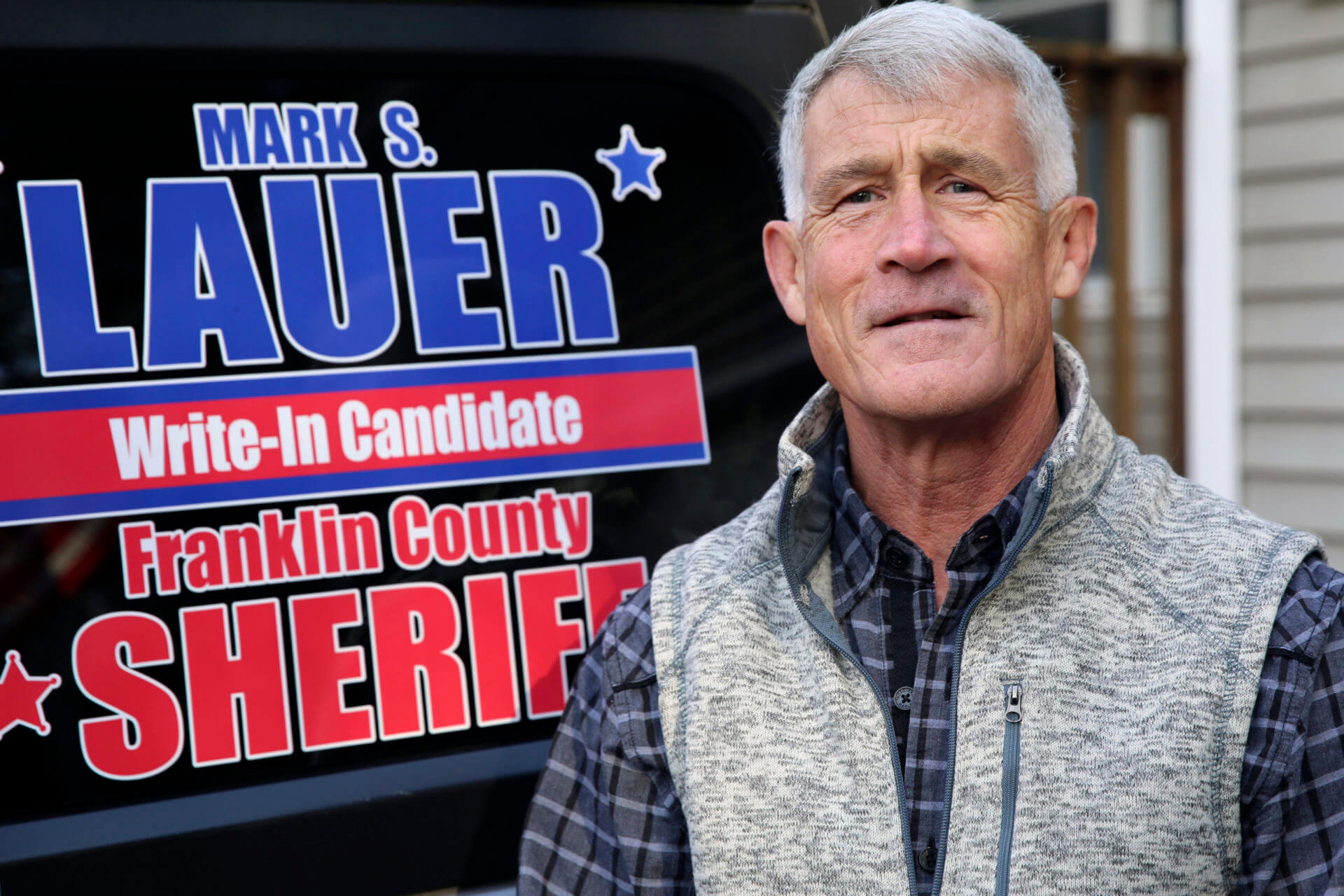