INDIANAPOLIS (AP) — A federal judge on Wednesday blocked an Indiana law that would require doctors to tell women undergoing drug-induced abortions about a disputed treatment for potentially stopping the abortion process.

The ruling came just before the so-called abortion reversal law adopted by Indiana’s Republican-dominated Legislature was to take effect Thursday. The temporary injunction issued by U.S. District Judge James Patrick Hanlon in Indianapolis puts the law on hold while the lawsuit challenging it makes its way through court. 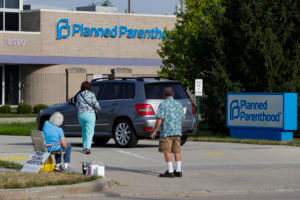 FILE – In this Aug. 16, 2019 file photo, abortion protesters attempt to handout literature as they stand in the driveway of a Planned Parenthood clinic in Indianapolis. A federal judge has blocked a new Indiana law that would require doctors to tell women undergoing drug-induced abortions about a disputed treatment for potentially stopping the abortion process. The ruling Wednesday, June 30, 2021, came just before the so-called abortion reversal law adopted by Indiana’s Republican-dominated Legislature was to take effect Thursday. (AP Photo/Michael Conroy)

Hanlon ruled that the abortion-rights groups had a “reasonable likelihood” of proving that the requirement would violate free speech rights of abortion providers. He also found that the state had not proven the effectiveness of the reversal process, which involves taking a different medication rather than the second of the two drugs involved in the procedure.

“While the State may require abortion providers to give a woman seeking an abortion certain types of information as part of the informed-consent process, that information must, at a minimum, be truthful and not misleading,” wrote Hanlon, an appointee of former President Donald Trump.

Abortion-rights group’s that filed the lawsuit argued that the law’s requirement would confuse patients and increase the stigma associated with obtaining an abortion, while also forcing doctors to provide what they regard as dubious medical information. Medical groups maintain the abortion pill “reversal” process is not supported by science and that there is little information about its safety.

Republican legislators argued the requirement would ensure that a woman had information about halting a medication-induced abortion if she changes her mind. GOP Gov. Eric Holcomb signed it into law in April.

Six states — Arkansas, Idaho, Kentucky, Nebraska, South Dakota and Utah — have similar requirements in place, while laws in North Dakota, Oklahoma and Tennessee have been blocked by legal challenges, according to the Guttmacher Institute, a research group that supports abortion rights. A similar law is set to take effect in July in West Virginia.

The Indiana attorney general’s office, which is defending the law, said it was reviewing the ruling to determine its next steps.
“I remain committed to protecting the sanctity of life and women’s health under the rule of law as my highest priority,” Republican Attorney General Todd Rokita said in a statement.

The office has argued that the Legislature was acting to protect “fetal life and women’s health.”

“Patients have the right to choose not to take the second pill and pursue alternative options to save their pregnancies,” the office said in a court filing. “Denying patients information regarding alternatives should they wish to continue their pregnancies harms women by depriving them of that choice.”

“No other healthcare providers are required to inform their patients about experimental medical interventions, the safety and efficacy of which are wholly unsupported by reliable scientific evidence, and no other patients are required to receive such information as a condition of treatment,” the lawsuit said.

Hanlon issued the ruling after holding a June 21 hearing, where Dr. George Delgado, a San Diego-area physician who is a founder of the Abortion Pill Reversal group, testified that the treatment is safe. He cited “50 to 75 successful reversals” he’s overseen directly.

Hanlon wrote that Indiana officials had the option to include information about the reversal process on a state health department website, which abortion clinics must already tell patients about.

Medication abortions accounted for 44% of the roughly 7,600 abortions performed in Indiana in 2019, according to the state health department’s most recent statistics.

The Indiana law is part of a wave of legislation pushed in several Republican-led states to further restrict medication abortion and ban telemedicine abortions.

Indiana’s Legislature has adopted numerous abortion restrictions over the past decade, with several later blocked by court challenges.
Among those challenges, a federal judge in 2019 ruled against the state’s ban on a common second-trimester abortion procedure that the legislation called “dismemberment abortion.”

The U.S. Supreme Court in 2019 also rejected Indiana’s appeal of a lower court ruling that blocked the state’s ban on abortion based on gender, race or disability. However, it upheld a portion of the 2016 law signed by then-Gov. Mike Pence requiring the burial or cremation of fetal remains after an abortion.