MINNEAPOLIS (AP) — George Floyd was honored Tuesday with a moment of silence in the city where he died at the hands of police, a death captured on a wrenching bystander video that galvanized the racial justice movement and continues to ripple a year later.

Floyd’s sister Bridgett and other members of Floyd’s family joined Mayor Jacob Frey, citizens and activists at a downtown park to observe the moment at 1 p.m., the time set by Democratic Gov. Tim Walz in a proclamation that said “true justice” for Floyd would only come by dismantling systemic racism.

“It’s been a troubling year, a long year,” Bridgett Floyd told the crowd. “But we made it. They say with God all things are possible and I’m a true believer in that … The love is very outpouring today. The love is here. George is here.”

A moment of silence was also held in New York and a rally was held in Los Angeles to honor Floyd. Globally, rallies took place in Greece, Spain and Germany to mark the day.

A family-friendly street festival was also planned at the Minneapolis intersection where Floyd died. The intersection was disrupted by gunfire just hours before the event.

Associated Press video from 38th Street and Chicago Avenue — informally known as George Floyd Square — showed people running and seeking cover as shots rang out. Police said a man later showed up at a nearby hospital with a gunshot wound. Police spokesman John Elder said authorities believe he was injured in the shooting at the square. He was in critical condition but was expected to survive.

Philip Crowther, a reporter working for AP Global Media Services, which provides live video coverage to customers, reported hearing as many as 30 gunshots about a block east of the intersection. Crowther said a storefront window appeared to have been broken by gunshots.

“Very quickly things got back to normal,” Crowther said. “People here who spend a significant amount of time, the organizers, were running around asking, ‘Does anyone need a medic?’”

Police said witnesses reported seeing a vehicle speeding away from the area. Elder said no one was in custody by midday Tuesday.

Like other major cities, Minneapolis has been struggling with rising gun violence, a problem made worse, in part, by many officers leaving the embattled force since Floyd’s death. A 6-year-old girl was fatally shot and two other children wounded in recent weeks. Mayor Jacob Frey last week unveiled a sweeping set of public safety proposals aimed at fixing the problem. Other groups are pursuing a more radical remaking of the police department.

The intersection of 38th and Chicago has been barricaded since soon after Floyd’s death and quickly turned into a memorial — and also a challenging spot for the city, with police officers not always welcome.

The square was being transformed Tuesday into an outdoor festival on the anniversary of his death, with food, children’s activities and a long list of musical performers. 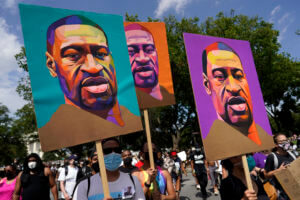 FILE – In this Aug. 28, 2020, file photo, people carry posters with George Floyd on them as they march from the Lincoln Memorial to the Martin Luther King Jr. Memorial in Washington. As the anniversary of George Floyd’s murder approaches, some people say the best way to honor him is for Congress to pass a bill in his name that overhauls policing. (AP Photo/Carolyn Kaster, File)

Floyd, 46, who was Black, died on Memorial Day 2020 after then-Officer Derek Chauvin knelt on his neck, pinning him to the ground for about 9 1/2 minutes. Chauvin, who is white, was convicted last month of murder and faces sentencing June 25. Three other fired officers still face trial.

The “Rise and Remember George Floyd” celebration, including a candlelight vigil at 8 p.m., caps several days of marches, rallies and panel discussions about his death and where America is in confronting racial discrimination.

In New York City, elected officials including Mayor Bill de Blasio and U.S. Rep. Hakeem Jeffries joined the Rev. Al Sharpton in kneeling for 9 minutes and 29 seconds to commemorate Floyd’s death. “As we took a knee, imagine how long that was on a human being’s neck,” Sharpton said. “Never switched knees, just dug in. It’s time we correct policing in this country.”

Many members of the Floyd family were in Washington, D.C., and planned to meet with President Joe Biden, who called family members after the Chauvin verdict and pledged to continue fighting for racial justice. 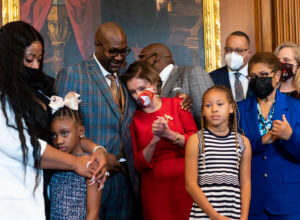 Speaker of the House Nancy Pelosi, D-Calif, center, talks with Philonise Floyd, the brother of George Floyd, left, as Rep. Karen Bass, D-Calif., right, looks on, as they stand for a photo during a meeting with Floyd family and Congressional members, Tuesday, May 25, 2021 at the Capitol in Washington. (Bill Clark/Pool via AP)

Floyd family attorney Ben Crump said he hoped Biden would renew his support for policing reform named for George Floyd that would ban chokeholds and no-knock police raids and create a national registry for officers disciplined for serious misconduct.

“Now is time to act,” Crump said Tuesday on CNN. “Not just talk but act.”

Floyd’s brother Philonise, appearing alongside Crump, said he thinks about George “all the time.”

“My sister called me at 12 o’clock last night and said ’This is the day our brother left us,’” he said, adding: “I think things have changed. I think it is moving slowly but we are making progress.”

Nur-D, whose real name is Matt Allen, took to the Minneapolis streets in the days after Floyd’s death, often providing medical assistance to protesters who were shot or gassed in confrontations with police. He eventually founded an organization, Justice Frontline Aid, to support safe protest.

He described the past year as “like we’ve lived 20 years inside of one” and hoped that people would feel “honesty and a real sense of togetherness” during Tuesday’s celebration.

“If you’re angry, you can be angry. If you’re sad, you can be sad,” Nur-D said in a follow-up interview. “If you’re feeling some sense of joy over the verdict and some sort of like step in the right direction, and you want to celebrate that, do that as well.”

The event was organized by the George Floyd Global Memorial. Angela Harrelson, an aunt of Floyd’s and a member of the board of directors, said the organization has stockpiled 3,000 items surrounding Floyd’s death — things like artwork left behind in the square — and will display some of them in a pop-up gallery.

Separately, the Floyd family announced the launch of a fund that will make grants to businesses and community organizations in the neighborhood where he died, as well as broader grants “encouraging the success and growth of Black citizens and community harmony.” The money comes from $500,000 earmarked as part of the city’s $27 million civil settlement for the Floyd family earlier this year. 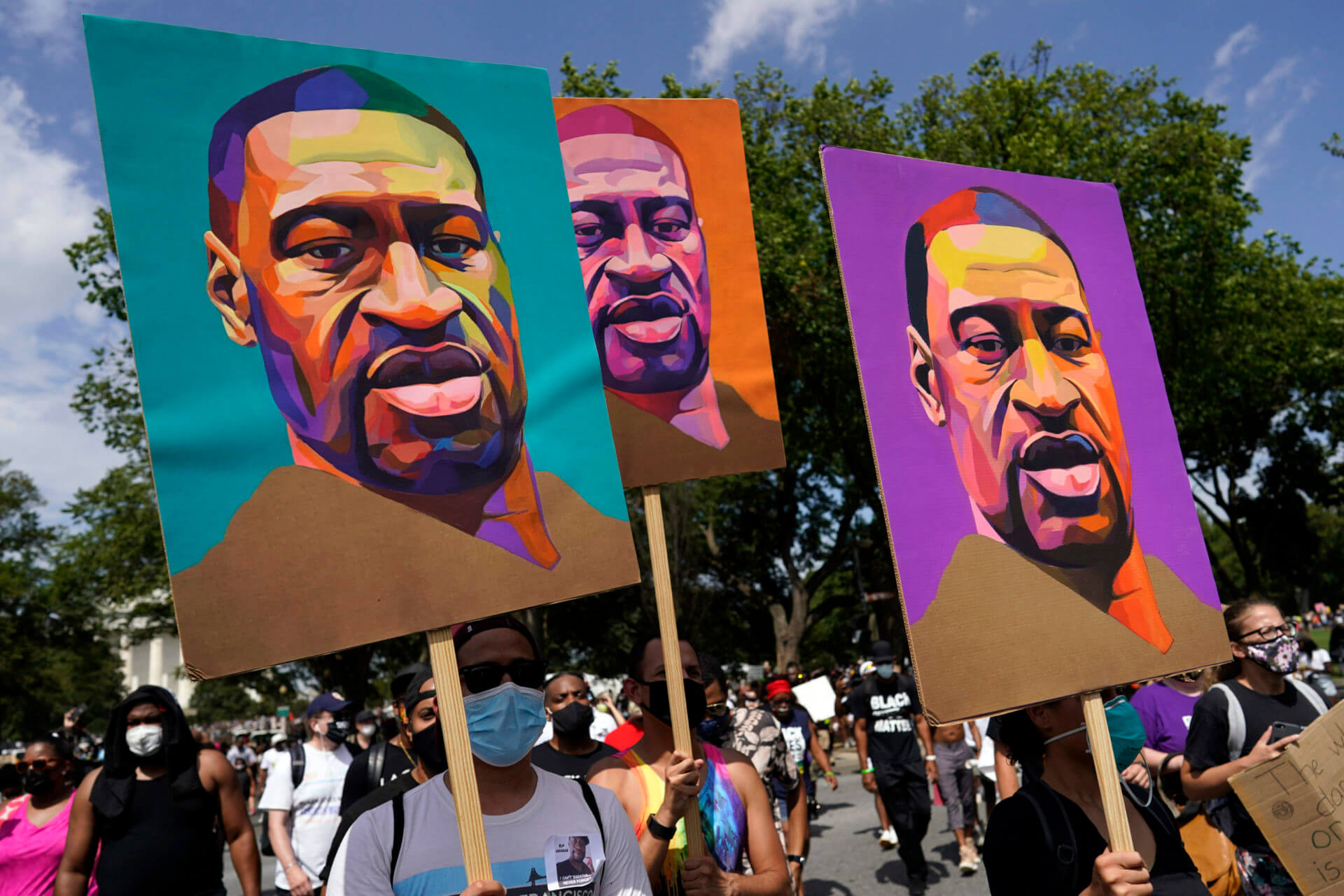 FILE - In this Aug. 28, 2020, file photo, people carry posters with George Floyd on them as they march from the Lincoln Memorial to the Martin Luther King Jr. Memorial in Washington. As the anniversary of George Floyd’s murder approaches, some people say the best way to honor him is for Congress to pass a bill in his name that overhauls policing. (AP Photo/Carolyn Kaster, File)
MORE NEWS