BOISE, Idaho (AP) — The Idaho attorney general has agreed to investigate the mother of two missing children and her new husband in connection with the death of his first wife. The mystery of the children’s disappearance and the deaths of three people close to the couple, including their spouses, has sparked investigations in several states and worldwide headlines.

Tammy Daybell’s death on Oct. 19, 2019, was described in her obituary as being from natural causes, and her husband Chad Daybell reportedly told authorities that she died in her sleep. But law enforcement became suspicious when he married Lori Vallow about two weeks later, and in December authorities had Daybell’s body exhumed. Autopsy and toxicology tests have not been released.

Lori Vallow came under police scrutiny in November after authorities learned that her two children, 17-year-old Tylee Ryan and 7-year-old Joshua “JJ” Vallow, had not been seen since September. Rexburg, Idaho, police say both Lori and Chad Daybell lied about the children’s whereabouts, and Lori Daybell is currently being held in jail on charges that she deserted or abandoned the kids, asked a friend to lie for her and obstructed the officers investigating the case. She’s pleaded not guilty.

Police in Rexburg have said they are gravely worried about the kids’ safety. They’ve asked people who visited Yellowstone National Park on Sept. 8, 2019, to scour their photos for any sign of the kids, Lori Daybell or Alex Cox. That’s the last known time that Tylee Ryan was seen, during a trip the family took to the park. JJ Vallow was last seen a few weeks later. Authorities have also indicated that they will search the remote wilderness in and around Yellowstone once weather conditions allow.

Idaho Attorney General Lawrence Wasden agreed last week to take over the investigation of Tammy Daybell’s death after a request from a local prosecutor, according to documents The Associated Press obtained through a public record request. 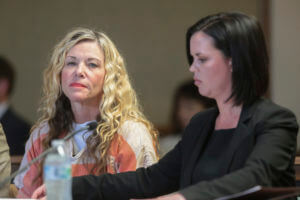 In this March 6, 2020, file photo, Lori Vallow Daybell glances at the camera during her hearing in Rexburg, Idaho. At her right is defense attorney Edwina Elcox. The Idaho attorney general has agreed to investigate the mother of two missing children and her husband in connection with the death of his first wife. Daybell is being held in an Idaho jail awaiting trial on charges that she abandoned her two kids, 17-year-old Tylee Ryan and 7-year-old Joshua “JJ” Vallow. The kids disappeared in September. (John Roark/The Idaho Post-Register via AP, Pool, File)

Fremont County prosecutor Marcia Murdoch asked Wasden’s office this month to consider the possibility of filing conspiracy, attempted murder and murder charges against Lori and Chad Daybell in Tammy Daybell’s death. The attorney general had initially turned down the request citing a lack of resources, according to Murdoch.

None of the other county prosecutors she approached were able to take the case, Murdoch told the state office when she made the request again on April 7.

“I am again requesting that the AG’s office take over this case because my office does not have the resources or the experience to handle the case,” Murdoch wrote in the letter obtained by The Associated Press. “We would be willing to assist in any way to help the AG’s office, as needed at your request and at your discretion.”

It’s not yet clear if the attorney general’s decision to take over the case will have an impact on Daybell’s request to have her $1 million bond reduced on the child abandonment charges. A judge in eastern Idaho is set to consider that request on Friday.