COLORADO SPRINGS, Colo. (AP) — A judge who dismissed a 2021 kidnapping case against the Colorado gay nightclub shooter warned last year that the defendant had been stockpiling weapons and planning a shootout, and needed mental health treatment or “it’s going to be so bad.”

The comments made by Judge Robin Chittum in August last year are contained in court documents obtained by The Associated Press. They add to the warning signs authorities had about Anderson Aldrich’s increasingly violent behavior and raise more questions about whether enough was done to stop the recent mass shooting at Club Q in Colorado Springs. 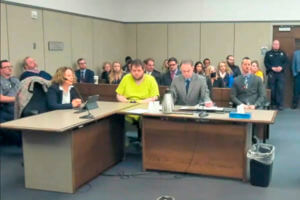 Five people were killed and 17 wounded in the Nov. 19 attack. Aldrich was charged last week with 305 criminal counts, including hate crimes and murder. Aldrich’s public defender has declined to talk about the case under Colorado judiciary rules.

The judge’s comments came during a preliminary hearing on charges that Aldrich kidnapped their grandparents, and had previously been under a court seal that was lifted last week.

“You clearly have been planning for something else,” Chittum told Aldrich during the hearing, after the defendant testified about an affinity for shooting firearms and a history of mental health problems.

“It didn’t have to do with your grandma and grandpa. It was saving all these firearms and trying to make this bomb, and making statements about other people being involved in some sort of shootout and a huge thing. And then that’s kind of what it turned into,” the judge said.

The 2021 charges against Aldrich — who had stockpiled explosives and allegedly spoke of plans to become the “next mass killer” before engaging in an armed standoff with SWAT teams — were thrown out during a four-minute hearing this past July at which the prosecution didn’t even argue to keep the case active.

Chittum, who received a letter last year from relatives of the grandparents warning that Aldrich was “certain” to commit murder if freed, granted defense attorneys’ motion to dismiss the case because a deadline was looming to bring it to trial.

There was no discussion at that July hearing about Aldrich’s mental health treatment, violent past, or exploring options to compel Aldrich’s grandparents and mother to testify.

Details of the failed 2021 prosecution — laid out in 13 court hearing transcripts obtained by the AP — paint a picture of potential missteps in the case. 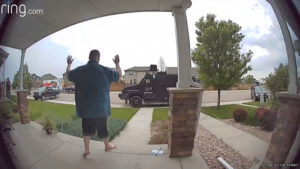 In this image from video provided by Leslie Bowman, Anderson Lee Aldrich surrenders to police at a home where his mother, Laura Voepel, was renting a room in Colorado Springs, Colo., on June 18, 2021. According to sealed law enforcement documents verified by The Associated Press, Aldrich’s actions brought SWAT teams and the bomb squad to the normally quiet neighborhood, forced the grandparents to flee for their lives and prompted the evacuation of 10 nearby homes to escape a possible bomb blast. (Leslie Bowman via AP)

During the 2021 standoff, Aldrich allegedly told the frightened grandparents about firearms and bomb-making material in the basement of the home they all shared. Aldrich vowed not to let the grandparents interfere with plans to “go out in a blaze.”

Aldrich — who is nonbinary and uses they/them pronouns, according to defense attorneys — livestreamed on Facebook a subsequent confrontation with SWAT teams at the house of their mother, Laura Voepel, where the defendant eventually surrendered, was arrested and had weapons seized. The FBI had received a tip on Aldrich a day before the threat but closed out the case just weeks later, and no federal charges were filed.

By August 2021, when Aldrich bonded out of jail, the grandparents were describing the suspect as a “sweet young” person, according to District Attorney Michael Allen. At two subsequent hearings that fall, defense attorneys described how Aldrich was attending therapy sessions for trauma, PTSD and mental health and was on lethargy-inducing medications, the transcripts show.

In an October 2021 courtroom exchange, Chittum told Aldrich to “hang in there with the meds.”

“It’s an adjustment period for sure,” Aldrich replied, to which the judge replied, “Yeah it will settle, don’t worry. Good luck.”

The case had been headed toward a plea agreement early this year but fell apart after family members stopped cooperating and prosecutors failed to successfully serve a subpoena to testify to Aldrich’s 69-year-old grandmother, who was bedridden in Florida.

There is scant discussion in the transcripts of efforts by prosecutors to subpoena other potential witnesses — including Aldrich’s mother, grandfather and a fourth person who is listed in court documents but not identified.

Howard Black, spokesperson for the district attorney’s office, has said he cannot share information about the kidnapping case because it’s part of the current investigation. Allen has said his office did everything it could to prosecute the case, including trying to subpoena Aldrich’s mother, but has repeatedly declined to elaborate.

Alan Dershowitz, an attorney and Harvard law professor, said that it’s extremely hard to predict violent crimes, but that Aldrich’s case is a rare example of when the evidence was so overwhelming for past and potential future crimes that the suspect “clearly should have been confined.”

“This does not seem like a hard case,” Dershowitz said Thursday. “This seems like a case of prosecutorial incompetence.”