LAFAYETTE (WRTV) — A mother and her boyfriend have been charged with beating to death the woman’s 3-year-old son in July, according to authorities in Lafayette, Indiana.

The toddler reportedly suffered from multiple blunt force traumatic injuries all over his body. The injuries that resulted in his death, however, were to his abdomen, which included lacerations of the kidney, small intestine ruptures, rib fractures and intestinal bleeding, the Tippecanoe County Coroner’s Office found. 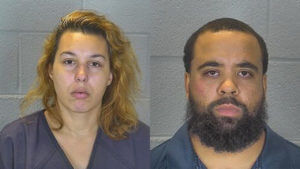 Lafayette Police Department officers were called to a home located in the 1200 block of Howell Street around 8:50 a.m. on July 5, on reports of a child not breathing. When officials arrived they found Zeus laying on the floor of a bedroom, dead.

According to court documents, officers observed bruising on Zeus’ chest, stomach, and other areas of his body that morning.

Cox, Garnes Sr. and his 9-year-old son were all inside of the home when the police arrived.

Officers interviewed the mother and her boyfriend at the scene. Crystal claimed, according to charging documents, that all four of them were together the day before Zeus’ death, on July 4. At first, Cox denied seeing any bruises on Zeus except for his legs when she was giving him a bath on July 3. Later, she said he was bruised on his abdomen because he fell on concrete on July 4, and had bruises on his forehead because he had run into a table a week earlier.

The night of July 4, Cox told detectives that she and her boyfriend gave Zeus Pedialyte and other medicines because he was throwing up. Due to his stomach pain, the couple had the 3-year-old sleep in bed with them.

Later, Dr. Darin Wolfe, a forensic pathologist for the State of Indiana, determined during an autopsy that Zeus’ vomiting and fever the night before his death were a result of his injuries to the kidneys and intestines.

The bruises on Zeus’ body were recent, Dr. Wolfe confirmed, and were not consistent with CPR, being whipped with a belt or falling down, as Garnes and Crystal initially described to officers.

According to charging documents, a man described as Garnes’s mentor told police Garnes had a drinking problem. And when he met up with Garnes the same day as Zeus’ death, he admitted to beating the child with a belt and “ended up making a comment to the effect that he thought he did” kill the 3-year-old.

Cox allegedly told Garnes’ mentor that same day that Zeus had called Garnes a name, which angered him, and “he took his anger out” on Zeus. She told the mentor that she believed Garnes killed her son.

Additionally, Garnes’ 9-year-old son, who also lived in the home around the time of the incident, told investigators his dad hit Zeus with his fist on July 4 in the living room, while Cox was present. He also told police Cox would hit her 3-year-old son, usually with a belt, on other occasions.

Prosecutors have requested no bond for Cox or Garnes.

This story was originally published August 18, 2021, by WRTV, an E.W. Scripps Company.