NEW YORK (AP) — Harvey Weinstein was mocked from the stage and jeered by attendees at a New York City actors showcase — a rare public appearance for the disgraced movie mogul ahead of his January rape trial. 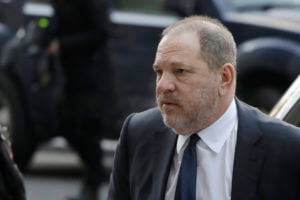 FILE – In this Dec. 20, 2018 file photo, Harvey Weinstein arrives at New York Supreme Court in New York. Weinstein was mocked from the stage and jeered by attendees at a New York City actors showcase — a rare public appearance ahead of his January rape trial. A comedian at Wednesday, Oct. 23, 2019 “Actor’s Hour” referred to the disgraced film mogul during her set as “the elephant in the room” and likened him to horror villain Freddy Krueger. (AP Photo/Mark Lennihan, File

A comedian at Wednesday’s “Actor’s Hour” referred to Weinstein during her set as “the elephant in the room,” likened him to horror villain Freddy Krueger and said she “didn’t know we had to bring our own Mace and rape whistles” to the event.

An actor tried questioning Weinstein, and another attendee shouted that he was a “monster.” Both people were told to leave the Manhattan bar where the event took place, while comedian Kelly Bachman’s commentary drew boos from some in the audience and one person yelled “shut up.”

Weinstein, 67, faces a January trial in Manhattan on charges he raped a woman in a hotel room in 2013 and performed a forcible sex act on a different woman in 2006. He maintains any sexual activity was consensual.

Weinstein, free on $1 million bail, is subject to electronic monitoring and limited to travel in New York and Connecticut.

Weinstein’s representatives said in a statement that the producer went to “Actor’s Hour” with friends, “trying to find some solace in his life that has been turned upside down” and that the outbursts were rude and uncalled for.

Spokesman Juda Englemayer added in an email Friday that Weinstein was “being treated as if he has been convicted.”

“Due process is still the foundation of each and every one of our civil rights in this country,” he said.

The host of “Actor’s Hour,” Alexandra Laliberte, apologized Friday for how the evening unfolded and said the actor who confronted Weinstein at his table should have been given the microphone to vocalize their feelings, instead of being asked to leave.

Laliberte, in a statement posted on the event’s Facebook page, said she chose to let Weinstein stay because no one objected when he arrived. She said she was not prepared to handle what became a “high-energy situation” surrounding the #MeToo figure.

“I am deeply saddened that this was not only triggering for attendees, but that they ultimately felt unsafe — some even outraged — when a safe environment is, at its core, what I set out to create,” Laliberte said. “Creating an environment that is at once safe but also leaves open forum for free speech is an extremely fragile endeavor.”

Weinstein and his entourage had nothing to do with the removal of the people who criticized him, spokesman Englemayer said. Weinstein, in a statement issued through the spokesman, said he welcomed such dialogue.

“I am happy to address anyone’s questions, and I invite anyone to ask,” Weinstein said in the statement. “We should all be offered the courtesy to voice opinions and be heard, and to even get answers. Nothing happened other than someone voicing concerns. I am glad we all still have these rights.”

In recent weeks, two books — “She Said” and “Catch and Kill” — have been published chronicling the reporting by Jodi Kantor and Megan Twohey of The New York Times and Ronan Farrow of The New Yorker that exposed Weinstein’s alleged behavior and the tactics the journalists say he used to try to thwart their reporting efforts.