ST. ANTHONY, Idaho (AP) — A mother charged with conspiring to kill her children, her estranged husband and a lover’s wife refused to enter a plea to murder and other charges on Tuesday, prompting an Idaho judge to enter a not guilty plea on her behalf.

Lori Vallow Daybell and her new husband, Chad Daybell, were both at the courthouse in the eastern Idaho town of St. Anthony for separate court proceedings: Lori Daybell for an afternoon arraignment that was delayed for months while she underwent treatment at a mental health facility, and Chad Daybell for a morning hearing over the trial venue.

The couple face numerous charges in the bizarre case, including conspiracy to commit murder and first-degree murder in connection with the deaths of Lori Daybell’s children, 7-year-old Joshua “JJ” Vallow, 16-year-old Tylee Ryan, as well as Chad Daybell’s first wife, Tammy Daybell. Lori Daybell is also charged in Arizona with conspiring to kill her former estranged husband, Charles Vallow, with the help of her now-deceased brother, Alex Cox. 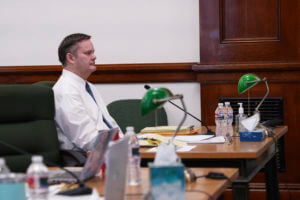 Chad Daybell listens to a motion to move his trial during a court hearing in St. Anthony, Idaho, Tuesday, April 19, 2022. Daybell’s wife, Lori Daybell, a mother accused of conspiring in the murders of her two children and her new husband’s late wife is scheduled to be arraigned in eastern Idaho on Tuesday. (Tony Blakeslee/EastIdahoNews.com via AP, Pool)

Chad Daybell pleaded not guilty to the charges months ago and is being held in the Fremont County Jail. The case against Lori Daybell was stalled after a judge found her mentally incompetent to aid in her own defense and ordered her to undergo treatment at a mental health facility. Last week, the judge said Daybell had been made competent and the case could go forward, and she was transferred to the Madison County Jail.

Lori Daybell kept her head down as she entered the courtroom and spoke quietly during her arraignment on Tuesday. The courtroom was mostly full, with JJ Vallow’s grandparents, Kay and Larry Woodcock, seated in one of the front rows. The Woodcocks wiped away tears as 7th District Judge Steven Boyce read the murder charge related to the young boy’s death.

Lori Daybell, wearing a light blue blouse and glasses, opted to stand silent when she was asked to enter a plea to the charges. Boyce, who told her she could face the death penalty or life in prison if convicted, entered a not guilty plea on her behalf.

Investigators say Chad and Lori Daybell began espousing an unusual, doomsday-focused system of religious belief involving “zombies,” teleportation and communication with other spiritual realms starting in 2018, when both were still married to other people. The Idaho prosecutors say they used their religious beliefs to justify or encourage the murders.

Lori Daybell’s brother Alex Cox shot and killed her estranged husband, Charles Vallow, in suburban Phoenix, according to an indictment in Arizona. At the time, Charles Vallow was seeking a divorce, and wrote in court filings that his wife believed she had become a god-like figure responsible for ushering in the biblical apocalypse.

Cox told police the shooting was in self-defense, and he was never charged. He later died of an apparent blood clot in his lung.

Shortly after Charles Vallow’s death, Lori Daybell — who then had the last name Vallow — and her children moved to the rural eastern Idaho community of Rexburg, near where Chad Daybell lived. At the time, Chad Daybell was married to Tammy Daybell. She died in October 2019.

Though Tammy Daybell’s obituary said her death was from natural causes, authorities grew suspicious when Chad and Lori Daybell married just two weeks later. Investigators had Tammy Daybell’s body exhumed for an autopsy, though authorities have not formally released her cause of death.

Police began searching for Lori Daybell’s youngest two children a few weeks later in November 2019 after relatives raised concerns. The Daybells quickly left town, and they were found months later in Hawaii without the children.

The children’s bodies were eventually found buried in Chad Daybell’s yard back in Idaho.

During a news conference after the arraignment, Larry Woodcock said he was happy that the case is moving forward, saying Lori Daybell’s “day will come.”

“She’s going to have a miserable life, and that’s all I ask for. I know that justice will be served,” Larry Woodcock said. 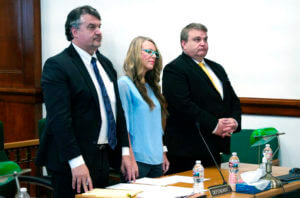 Lori Vallow Daybell, center, listens during a court hearing in St. Anthony, Idaho, Tuesday, April 19, 2022. Daybell, who is charged with conspiring to kill her children, her estranged husband and a lover’s wife, refused to enter a plea to murder and other charges on Tuesday, prompting an Idaho judge to enter a not guilty plea on her behalf. (Tony Blakeslee/EastIdahoNews.com via AP, Pool)

The arraignment was held about an hour after a motion hearing where prosecutors and Chad Daybell’s attorney, John Prior, argued over whether the entire trial should be moved to a more populated region or whether jurors from Ada County should be brought across the state to Fremont County for the trial, which is expected to last about 10 weeks.

The judge had originally ruled that the trial would be moved to Ada County, which includes the city of Boise, but Prosecutor Rachel Smith contended that would substantially raise trial-related costs for taxpayers and potentially witnesses.

Prior said ensuring a fair trial is more important than any financial burden faced by Fremont County. He also said sequestering a jury in Fremont County would essentially turn jurors into prisoners, with no phones, television or ability to move around town.

The judge said he would issue a written ruling on the matter.

The judge has previously ordered that Chad and Lori Daybell will be tried together. But though Chad Daybell has waived his right to a speedy trial — with the trial tentatively set for January 2023 — Lori Daybell did not.

Her attorney, Jim Archibald, told the judge on Tuesday that Lori Daybell would not waive her right to a speedy trial, which means the case has to be tried within six months. It’s not yet clear if that means the Daybells will be tried separately or if the date previously set for trial in Chad Daybell’s case will be moved up. 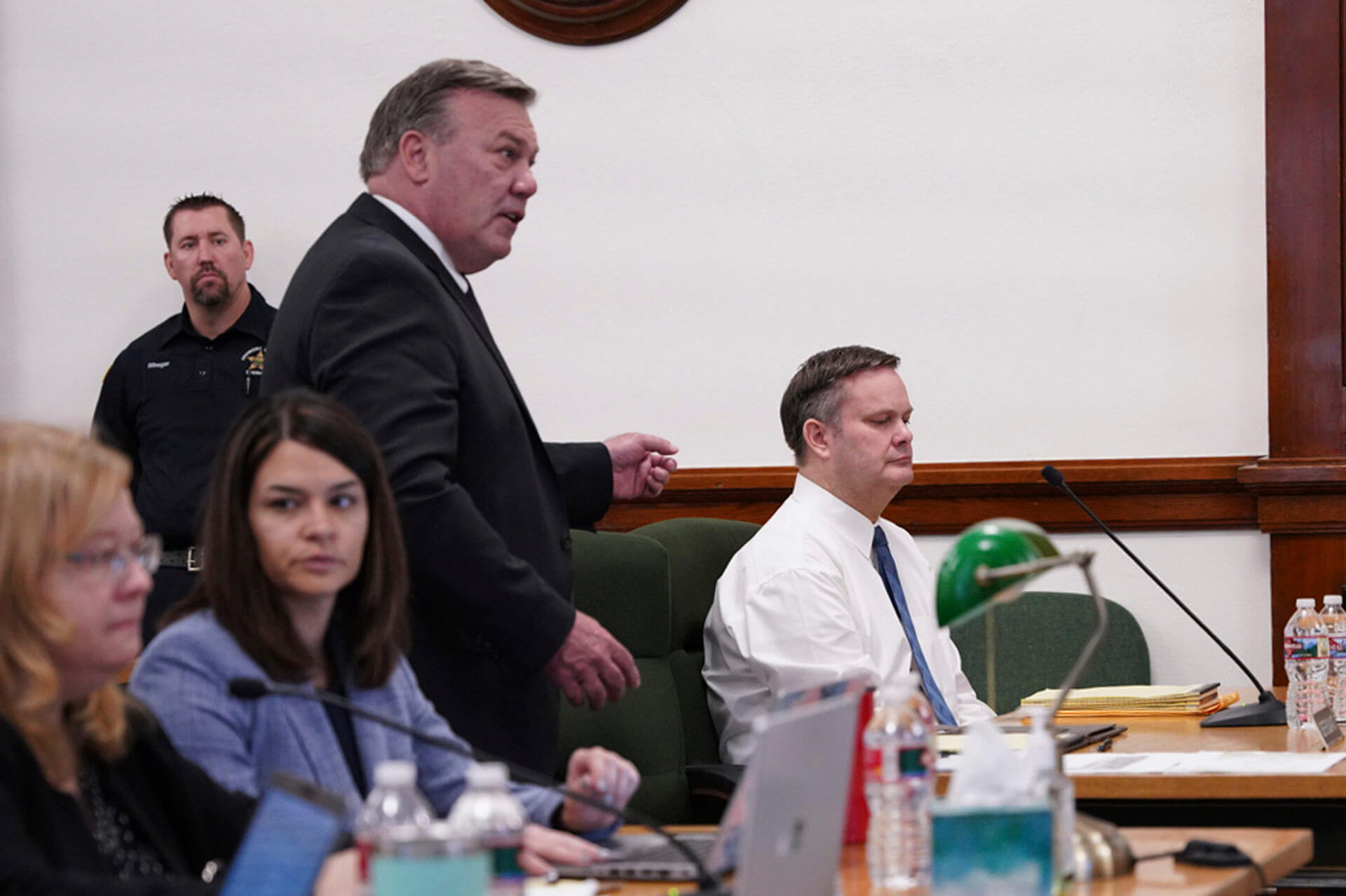 Chad Daybell listens to a motion by his defense attorney, John Prior, standing, to move his trial during a court hearing in St. Anthony, Idaho, Tuesday, April 19, 2022. Daybell's wife, Lori Daybell, a mother accused of conspiring in the murders of her two children and her new husband's late wife is scheduled to be arraigned in eastern Idaho on Tuesday. (Tony Blakeslee/EastIdahoNews.com via AP, Pool)
MORE NEWS