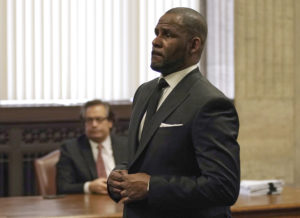 U.S. District Judge Harry Leinenweber handed down the ruling Tuesday after Kelly was arrested last week and charged in Chicago and New York with sex crimes including having sex with minors and trying to cover it up.

Kelly, wearing an orange jumpsuit and shackled at the ankles, did not speak except to say “yes sir” when the judge asked if he understood the charges. His attorney, Steve Greenberg, submitted a not guilty plea.

Prosecutors argued that Kelly would be an extreme risk if released, especially to minors, and that he might flee.

Singer R. Kelly, already facing sexual abuse charges brought by Illinois prosecutors, was arrested in Chicago on a sweeping federal indictment that accuses him and members of his entourage of recruiting women and girls to engage in illegal sexual activity with the performer.

The indictment unsealed in the Eastern District of New York includes charges of racketeering, kidnapping, forced labor and the sexual exploitation of a child.

It says Kelly and his managers, bodyguards and other assistants picked out women and girls at concerts and other venues and arranged for them to travel to see Kelly. They also set rules the women and girls had to follow, including not leaving their rooms — even to eat or go to the bathroom — without Kelly’s permission, calling the singer “Daddy,” and not looking at other men, the indictment alleges.

The indictment alleges that the criminal acts occurred over two decades dating back to 1999, both in the U.S. and overseas. It accuses Kelly of engaging in sexual acts with girls under 18 and without disclosing that he had a sexually transmitted disease. It also accuses him of producing child pornography, including by asking minors to send him photographs.

U.S. Attorney’s Office spokesman Joseph Fitzpatrick said the R&B singer was out walking his dog when he was taken into custody about 7 p.m. Thursday and was being held by federal authorities. According to the Federal Bureau of Prisons website, Kelly is being held at the high-rise Metropolitan Correctional Center, in downtown Chicago.

He was arrested after the indictment was handed down in federal court for the Northern District of Illinois.

Kelly’s attorney, Steve Greenberg, said Friday that federal agents arrested Kelly on charges out of Illinois and New York. The singer hopes to be released after a bail hearing early next week, Greenberg said.

The conduct Kelly is charged with in federal court “appears to largely be the same” as what he is charged with in state court, Greenberg said, adding that Kelly “was aware of the investigations and the charges were not a surprise.” 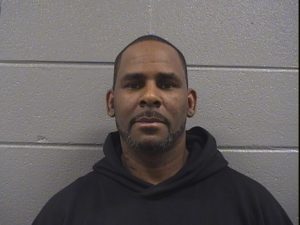 The arrest was the second time this year that Kelly has been taken into custody in Chicago on sex charges. The 52-year-old Grammy winner, whose real name is Robert Kelly, was arrested in February on 10 counts in Illinois of sexually abusing three girls and a woman. He pleaded not guilty to those charges and was released on bail.

Then on May 30, Cook County prosecutors added 11 more sex-related counts involving one of the women who accused him of sexually abusing her when she was underage.

Darrell Johnson, a publicist for Kelly, said he planned to deliver a statement about the latest developments at a Friday morning news conference in Atlanta. He declined to comment ahead of that time.

Kelly’s attorneys could not immediately be reached for comment on the federal charges. Fitzpatrick said Kelly’s arraignment date and time had not yet been set.

Kelly has faced mounting legal troubles this year after Lifetime aired a documentary “Surviving R. Kelly,” which revisited allegations of sexual abuse of girls. The series followed the BBC’s “R Kelly: Sex, Girls & Videotapes,” released in 2018, that alleged the singer was holding women against their will and running a “sex cult.”

Soon after the release of the Lifetime documentary, Cook County State’s Attorney Kim Foxx said her office had been inundated with calls about the allegations in the documentary. Her office’s investigation led to the charges in February and additional counts added in May.

Kelly avoided prison after similar allegations were made more than a decade ago. A jury in 2008 acquitted him of child pornography charges that stemmed from a videotape, obtained by the Chicago Sun-Times, allegedly showing Kelly having sex with a minor.

Kelly, then 27, wed Aaliyah Dana Haughton, then 15, at a suburban Chicago hotel. The singer had been his protege, and he wrote and produced her 1994 debut album, “Age Ain’t Nothing But A Number.” The marriage was later annulled, and the two refused to confirm it happened. In 2001, Aaliyah died in a light aircraft crash in the Abaco Islands, Bahamas.

A Chicago woman, Tiffany Hawkins, sued Kelly and his recording and management companies alleging she suffered personal injuries and emotional harm because she had sex with the singer in 1991, when she was 15. The relationship ended in 1994 when she turned 18. The woman said she met Kelly while a freshman at Kenwood Academy, a high school Kelly attended but didn’t graduate from. She was seeking $10 million in damages, but the Chicago Sun-Times reported in December 2000 that she settled for $250,000. Over the next two years, Kelly settled three more cases out of court but denied wrongdoing. 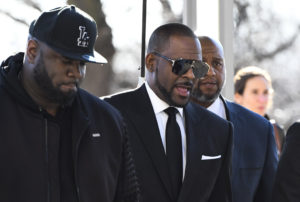 R. Kelly, right, arrives at the Leighton Criminal Court for a hearing on Friday, March 22, 2019, in Chicago. (AP Photo/Matt Marton)

Kelly was indicted on 21 counts of child pornography. The 33-year-old singer was accused based on a videotape allegedly showing him having sex with an underage girl. The Sun-Times reported the then-14-year-old girl was the daughter of an associate of the singer. Kelly was acquitted on all counts in June 2008.

Kelly goes on trial after a delay of five years and is acquitted on all counts after less than a full day of deliberations.

BuzzFeed reported the singer lured women into “cult-like” relationships. The internet media outlet reported that Kelly was keeping women aged 18 to 31 in properties in Chicago and Georgia, where he abused and secluded them from their families. No charges resulted because the women were of legal age. When contacted by police, one of the women told authorities she was “fine” and didn’t want to be bothered. At the same time, Jerhonda Pace said she became sexually involved with Kelly when she was a 16-year-old fan.

Faith Rodgers filed a lawsuit in New York alleging Kelly sexually abused and demeaned her, locked her in rooms and vehicles for punishment and infected her with herpes. Rodgers said in the lawsuit that the abuse took place during a roughly yearlong relationship. Rodgers made the same allegations in a police report filed in April 2018 in Dallas that Kelly’s management team denied. Rodgers, then 20, said in a television interview that Kelly, 51, instructed her to call him “daddy” and told her his goal was to teach her how to have sex like a “mature woman.”

Andrea Kelly, R. Kelly’s ex-wife and mother of his three children, said in a television interview the singer abused her throughout their 13-year marriage and despair led her to consider suicide. During a later interview, she said their arguments often ended in violence, including an altercation in which she said he pulled her left arm behind her back and pushed his forearm against her neck. “I think the reason why I think I made it out is because I said, ‘Robert, you’re going to kill me. I can’t breathe,'” she said in an October 2018 interview on ABC’s “The View.” Andrea Kelly, who was married to the singer from 1996 to 2009, said she was speaking out to save lives and bring validity to other women’s stories of alleged abuse at the hands of the entertainer.

Lifetime network begins airing the docuseries “Surviving R. Kelly.” The series looked at the singer’s history, and allegations that he has sexually abused women and teenage girls. The series presented first-hand accounts of years of alleged abuse against young girls and women by Kelly. Several subjects noted the singer and his entourage purposefully targeted Kenwood Academy girls at a nearby McDonald’s. He has denied doing anything wrong, however there has been fallout, with reports his record label dropped him. The #MeToo and #MuteRKelly movements have demanded his music be dropped from streaming services and radio play.

Kelly is charged with 10 counts of aggravated sexual abuse involving four victims , including at least three between the ages of 13 and 17. Some of the alleged abuse went back at least as far as 1998, according to charging documents. An indictment unsealed Friday specifically referenced abuse that took place around Feb. 18, 2003. 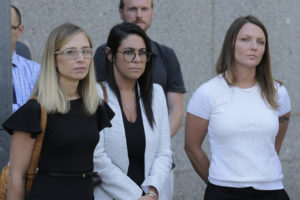 Cook County prosecutors add 11 more sex-related counts involving one of the victims who accused him of sexually abusing her when she was underage.

Prosecutors in Illinois and New York charge Kelly in federal court, accusing him and members of his entourage of recruiting women and girls to engage in illegal sexual activity with the singer and paying them to cover up his crimes, including those at the center of his 2008 acquittal on child pornography charges.