MINNEAPOLIS (AP) — A state court trial for three former Minneapolis police officers charged in the death of George Floyd has been rescheduled for June 13, after both the defense and prosecutors requested a postponement. 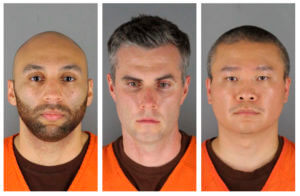 Thomas Lane, J. Kueng and Tou Thao face charges of aiding and abetting both murder and manslaughter. Their trial was supposed to start March 7, but both sides sought a delay because the three officers also face a federal trial on allegations that they violated Floyd’s civil rights while acting under government authority. Their federal trial starts Thursday with jury selection.

Derek Chauvin, who is white, was convicted of murder and manslaughter for pressing his knee against Floyd’s neck as Floyd repeatedly said he couldn’t breathe.

Kueng and Lane helped restrain the 46-year-old Black man as he was on the ground. Kueng knelt on Floyd’s back and Lane held down Floyd’s legs. Thao kept bystanders from intervening.

Chauvin pleaded guilty in December to a federal count of violating Floyd’s civil rights during the May, 25, 2020, arrest. He was sentenced to 22 1/2 years on the state murder conviction, and is awaiting sentencing in the federal case.

The killing, which was captured on video, galvanized protests against police brutality around the globe.