DALLAS (AP) — A white former Dallas police officer who said she fatally shot her unarmed, black neighbor after mistaking his apartment for her own was found guilty of murder on Tuesday.

A jury reached the verdict in Amber Guyger’s high-profile trial for the killing of Botham Jean after six days of witness testimony but just a handful of hours of deliberation.

Cheers erupted in the courthouse as the verdict was announced, and someone yelled, “Thank you, Jesus!” In the hallway outside the courtroom where Guyger was tried, a crowd celebrated and said “black lives matter” in raised voices. When the prosecutors walked into the hall, they broke into cheers.

In Texas, the sentence for murder is from five to 99 years in prison. The jury is expected to return Tuesday afternoon to hear additional testimony before setting Guyger’s punishment within that range.

Family members are expected to testify about how they were affected by Jean’s killing, and Guyger’s defense attorneys can argue that she deserves a light sentence because she acted out of sudden fear and confusion. The judge is expected to provide guidance on sentencing law. It is unclear how long the punishment phase of the trial will last.

The basic facts of the unusual shooting were not in dispute throughout the trial. In September 2018, Guyger walked up to Jean’s apartment — which was on the fourth floor, directly above hers on the third — and found the door unlocked. She was off duty but still dressed in her police uniform after a long shift when she shot Jean with her service weapon. The 26-year-old accountant had been eating a bowl of ice cream before Guyger entered his home.

Jean, who grew up in the Caribbean island nation of St. Lucia, came to the U.S. for college before starting his career as an accountant. His shooting drew widespread attention because of the strange circumstances and because it was one in a string of shootings of unarmed black men by white police officers.

“A 26-year-old college-educated black man, certified public accountant, working for one of the big three accounting firms in the world … it shouldn’t take all of that for unarmed black and brown people in America to get justice,” Benjamin Crump, one of the lawyer’s for Jean’s family, said at a news conference.

Crump said the verdict honors other people of color who were killed by police officers who were not convicted of a crime. 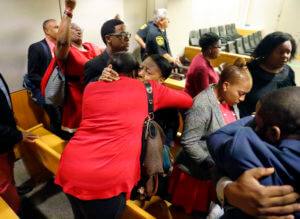 Members of Botham Jean’s family embrace in the courtroom after fired Dallas police Officer Amber Guyger was found guilty of murder Tuesday, Oct. 1, 2019, in Dallas. Guyger shot and killed Botham Jean, an unarmed 26-year-old neighbor in his own apartment last year. She told police she thought his apartment was her own and that he was an intruder. (Tom Fox/The Dallas Morning News via AP, Pool)

“This is a huge victory, not only for the family of Botham Jean, but this is a victory for black people in America. It’s a signal that the tide is going to change here. Police officers are going to be held accountable for their actions, and we believe that will begin to change policing culture around the world,” Merritt said.

The jury that convicted Guyger was largely made up of women and people of color.

The verdict also diffused tensions that began simmering Monday when jurors were told they could consider whether Guyger had a right to use deadly force under a Texas law known as the castle doctrine — even though she wasn’t in her own home.

The law is similar to “stand your ground” measures across the U.S. that states a person has no duty to retreat from an intruder. Prosecutor Jason Fine told jurors that while the law would have empowered Jean to shoot someone barging into his apartment, it doesn’t apply “the other way around.”

Guyger was arrested three days after the killing. She was later fired and charged with murder , but only spoke publicly about the shooting upon taking the witness stand last Friday. Tension has been high during the trial in Dallas, the same city where an attack three years ago killed five police officers.

The 31-year-old tearfully apologized for killing Jean and told the jurors she feared for her life upon finding the door to what she thought was her apartment unlocked. Guyger said that Jean came toward her at a fast walk when she entered with her gun out, but prosecutors have suggested he was just rising from a couch toward the back of the room when the officer shot him.

In a frantic 911 call played repeatedly during the trial, Guyger said “I thought it was my apartment” nearly 20 times. Her lawyers argued that the identical physical appearance of the apartment complex from floor to floor frequently led to tenants to the wrong apartments.

Prosecutors, however, questioned how Guyger could have missed numerous signs that she was in the wrong place, and suggested she was distracted by sexually explicit phone messages with her police partner.

They also asked why Guyger didn’t radio in for help when she thought there was a break-in at her home. Guyger said that going through the doorway with her pistol drawn, “was the only option that went through my head.” 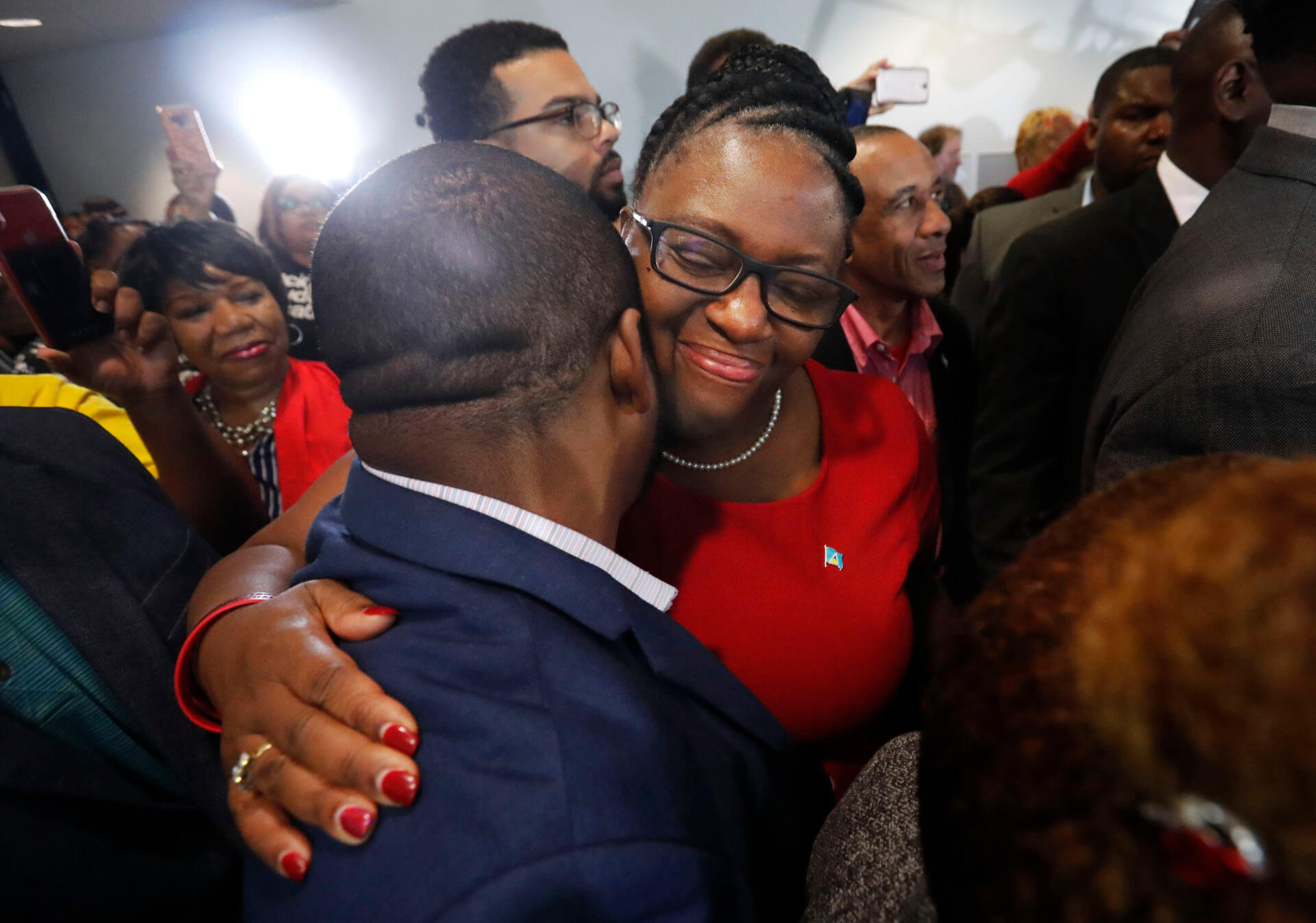 Allison Jean, center, the mother of Botham Jean, hugs a supporter after fired Dallas police officer Amber Guyger was found guilty of murder, Tuesday, Oct. 1, 2019, in Dallas. Guyger shot and killed Botham Jean, an unarmed 26-year-old neighbor in his own apartment last year. She told police she thought his apartment was her own and that he was an intruder. (AP Photo/LM Otero)
MORE NEWS