TAMPA, Fla. (AP) — Jurors told a judge they can’t reach a verdict in the double murder trial of a Tampa ice cream man.

The jury of nine women and three men wrote a note to Hillsborough Circuit Judge Christopher C. Sabella on Friday morning, saying “The jury is hung. This is not going to change,” the Tampa Bay Times reported. They deliberated about six hours over two days before informing the judge of their decision.

The case, which had been on the docket for nearly a decade and took three weeks to try, could now either be set for a new trail or prosecutors could either drop the charges or reach a plea deal with defendant Michael Keetley, the newspaper reported.

Prosecutors said Keetley shot six men on a porch in Ruskin on Thanksgiving morning 2010 to get revenge for being robbed of $12 and shot months earlier. Keetley required surgery and therapy after the shooting, the newspaper reported.

Keetley began his own investigation into the case, identifying a man called “Creep” or “Creeper” as his attacker, prosecutors told the jury. He was looking for that man on Thanksgiving Day and in what prosecutors deemed a case of mistaken identity, approached the men on the porch.

Jurors were told Keetley asked the men where “Creeper” was and then asked them to get down. The men dropped to their knees before he started shooting, according to testimony. Two brothers, Juan and Sergio Guitron, died and four others were injured. 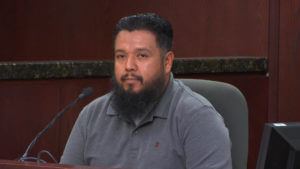 Shooting survivor Gonzalo Guevara was “2000% sure” when he picked a photo of Michael Keetley as the shooter.

Some survivors testified during the trail, including Gonzalo Guevara. His testified that he was shot four times. He got a good look at the gunman and picked Keetley’s photo out of a photo lineup later while he was in the hospital.

Keetley has always maintained his innocence.

“I’m just telling you, it wasn’t me and it wasn’t the van,” Keetley said in audio played for the jury of an interview between the ice cream man and detectives. “It just wasn’t.”