Walsh said Venegas had been the suspect in a May 20 carjacking and was under covert surveillance from a Metro helicopter Thursday evening when he carjacked a white Chevy Avalanche at gunpoint.

The air unit recorded the encounter and a police chase began.

Walsh said an unmarked police cruiser was disabled when it collided with the rear of the stolen car near N 5th and Carey, and the officer in that car was taken to the hospital with minor injuries.

Another unit with two officers attempted a PIT maneuver on Venegas’s car near 5th and Craig, but Walsh said Venegas fired toward the officer’s car striking the windshield.

One of those officers returned fire through his windshield and no rounds struck Venegas’s truck.

Walsh said Venegas then blocked a car on the roadway on Desert Inn and Jones, and attempted to steal the car from a woman at gunpoint.

Video from the Metro helicopter showed Venegas firing towards the woman as she backed away from his attempt to reach her driver door.

Walsh said Venegas was able to chase down the stolen car he’d left in drive and continue the pursuit to Desert Inn and Decatur where police said he, again, failed to carjack a man.

Walsh said Venegas got back into his stolen car, drove toward officers, and several officers fired toward the vehicle. 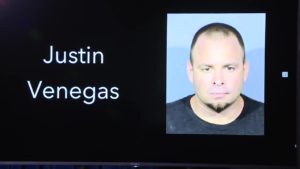 No rounds hit the suspect, and he continued the chase North toward Charleston and Decatur where his Chevy hit a K-9 police cruiser head on injuring the officer behind the wheel.

“He’s banged up pretty good,” Walsh said. “You get hit head on by someone trying to kill you at 67 miles an hour, we’re very fortunate that we’re not burying that officer, or the officers that were shot at.”

That officer was taken to UMC Trauma and later released to recover at home.

The police K-9, Boris, was not injured in the crash.

This is the 7th OIS of the year, up from 5 at this time last year.

This story was originally published Aug. 17 by KTNV in Las Vegas, an E.W. Scripps Company.