Three children who were sexually abused by their father are accusing a Utah state legislator and a prominent Salt Lake City law firm of conspiring with The Church of Jesus Christ of Latter-day Saints to cover up the abuse, allowing it to go on for years.

In a court filing in Cochise County, Arizona, made public Wednesday, the children of the late Paul Adams asked a judge for permission to add Republican state Rep. Merrill F. Nelson and law firm Kirton McConkie as defendants in their lawsuit against the church, widely known as the Mormon church. 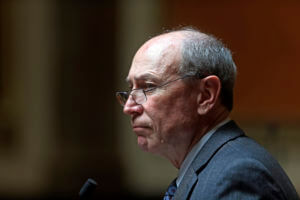 FILE – Republican Rep. Merrill Nelson speaks during a special session at the Utah State Capitol, in Salt Lake City, on April 18, 2018. In a Wednesday, Oct. 12, 2022 filing, three children who were sexually abused by their father, the late Paul Adams, are accusing Nelson and a prominent Salt Lake City law firm, Kirton McConkie, of conspiring with the Church of Jesus Christ of Latter-day Saints to cover up their abuse, allowing it to go on for years. (AP Photo/Rick Bowmer, File)

The suit accuses the Mormon church of failing to notify police or child welfare officials that Adams was abusing his older daughter.

In 2010, Adams confessed to his bishop, John Herrod, that he had sexually abused his daughter, according to legal records. Herrod reported the abuse to a church “abuse help line” and was advised not to report it to police or child welfare officials. The abuse was kept secret, and Adams continued raping his older daughter and her younger sister for several years. Adams was later charged by federal officials with posting videos of the abuse on the Internet.

Herrod’s decision not to report came after speaking with Nelson, according to church records included as evidence in the case. Nelson was a shareholder at Kirton McConkie, which has more than 160 attorneys, according to its website. Nelson was one of several lawyers at the firm who routinely fielded calls made by bishops to the help line.

In their legal filing, the Adams children -– two daughters and a son —- say new evidence from the church “has revealed an ever-increasing group who knew about criminal misconduct in the Adams family but never reported it to the police.”

For instance, Kirton McConkie attorney Peter Schofield was also consulted in the Adams case, according to new pretrial testimony that was reviewed by The Associated Press. Like Nelson, Schofield has been associated with the help line for many years, according to legal documents, and is currently one of the lawyers defending the church in the Adamses’ suit. 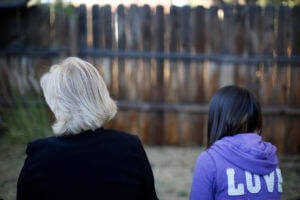 FILE – MJ and her adoptive mother sit for an interview in Sierra Vista, Ariz., on Oct. 27, 2021. State authorities placed MJ in foster care after learning that her father, the late Paul Adams, sexually assaulted her and posted video of the assaults on the Internet. (AP Photo/Dario Lopez-Mills)

Lawyers for the three Adams children said they had no additional comment on their latest legal filing. A spokesman for the church declined to comment.

Nelson, who recently announced his retirement from the Legislature, did not immediately return a message seeking comment from the AP. He has defended the church’s use of the help line in the Adams case. During an AP interview in September, Nelson said, “it seems to me like it did operate as intended.” The veteran legislator’s remarks came before it was reported that Nelson had fielded the call from Herrod about the abuse.

In a recorded interview with Department of Homeland Security agents, Herrod said he called the help line and was told that Arizona law barred him from reporting Adams’ abuse, leaving him with the impression he could be sued if he did. But Arizona’s child-sex-abuse reporting law provides blanket civil and criminal immunity to anyone reporting information about child sex abuse to civil authorities.

In August, the AP reported that Adams told Herrod he sexually abused his older daughter, identified as MJ, in 2010. Church lawyers have said that Herrod, and later another bishop, Robert “Kim” Mauzy, legally withheld information about MJ’s abuse from law enforcement under the state’s “clergy-penitent privilege.”

Although Arizona law requires clergy and other professionals to report child sex abuse and neglect, it permits clergy to withhold the information if it is obtained during a spiritual confession. Arizona is one of 33 states that maintain the clergy-penitent privilege loophole, which exempts clergy of all denominations from the requirement to report child abuse if they learn about the crime in a confessional setting.

The AP’s investigation in August revealed a system, centered on the help line, for screening all accusations of child sex abuse within the church before reporting the information to civil authorities.

This included a policy of destroying all records of calls to the help line at the end of each day, according to the AP’s findings. Meanwhile, all calls referring to serious instances of abuse, including those involving bishops or abuse on church property, are immediately referred to lawyers with Kirton McConkie, which insists the calls are confidential and out of reach of law enforcement under the attorney-client privilege.

In their court filing, lawyers for the three Adams children argue that the church requirement that bishops call the help line before notifying law enforcement regarding child sexual abuse reports runs counter to Arizona law, which requires clergy and other professions to “immediately report” any information about child sex abuse to police or child welfare officials.

William Maledon, a lawyer representing the church in the Arizona suit, argues that the word “immediately” in the law is open to interpretation. “Who knows what ‘immediately’ means in that context?” he asked during a July AP interview. “You can make the argument that it means as soon as you determine that you have an obligation to report. That’s the way I would interpret it, and I think the way any good lawyer would interpret it.”

In addition to Nelson and Kirton McConkie, lawyers for the Adams children are seeking permission to add as additional co-conspirators Paul Adams’ then-wife, Leizza Adams, and “LDS Family Services,” a separate corporation affiliated with the church. In sworn legal statements, church officials have said calls to the help line are answered by social workers with LDS Family Services. Under Utah’s child sex abuse reporting law, social workers are required to report information about actual or suspected child sex abuse to civil authorities, according to the new filing.

Church lawyers say that in the Adams case, all calls to the help line that were made by Herrod and Mauzy were taken by Kirton McConkie attorneys. “All of those were with attorneys or para-professionals,” Maledon said in the July interview. “None of them in this case were with anyone other than an attorney or attorney staff.”

Paul Adams died by suicide while in custody in 2017, after being arrested by Homeland Security agents. Leizza Adams served more than two years in state prison on child sex abuse charges. Three of their six children were taken in by members of Leizza Adams’ extended family. The remaining three were adopted by Arizona families and have filed suit against the church.