AUSTIN, Texas (Court TV) — Kaitlin Armstrong, the suspected shooter in the so-called Love Triangle Murder, is back in Austin. She was apprehended last week on a beach in Costa Rica after 43 days. She was picked up looking drastically different than in previous photos.

“Inside Edition” reported that Armstrong may have had plastic surgery while on the run. There are also reports that Armstrong was carrying her sister’s passport at the time.

Armstrong, 34, was wanted for the murder of cycling star Anna Moriah Wilson, 25. She was deported to Texas, booked into the Harris County Jail in Houston, and this morning was transferred to Austin, which is in Travis County. 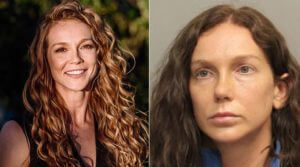 According to Travis County court records, Armstrong’s bond is set at $3.5 million. If she makes bond, she must surrender her passport prior to release and will be required to wear a GPS monitor and be subject to a curfew from 8 p.m. through 8 a.m.

>>>>>WATCH: Kaitlin Armstrong Captured, May Have Had Plastic Surgery<<<<<

Wilson’s body was discovered on May 11. On May 19, Austin police issued a murder warrant for Armstrong.

According to authorities, Armstrong sold her black Jeep Grand Cherokee for $12,200 on May 13. She had been questioned by police about Wilson’s death that same day; she then flew from Texas to New York before flying from Newark, NJ to Costa Rica on May 18 using a fraudulently obtained passport.

According to the affidavit, Armstrong’s Jeep was spotted on surveillance video outside the home where Wilson was found shot to death.

Wilson had been in Austin for a cycling competition. According to an affidavit, Wilson briefly dated Armstrong’s boyfriend, Colin Strickland, while the two were broken up. Armstrong and Strickland later reconciled. Strickland is reportedly cooperating with the investigation and is not a suspect.