BISMARCK, N.D. (Court TV) — A former chiropractor convicted of killing four people in a small North Dakota town has died in prison, according to authorities. 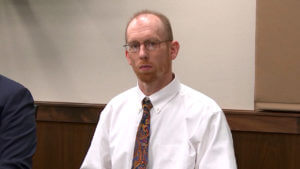 Chad Isaak, 48, was pronounced dead on Sunday at Sanford Hospital in Bismarck, according to a news release from the North Dakota Highway Patrol.

Officials said troopers were called to the North Dakota State Penitentiary at 5:44 p.m. “regarding a resident who had caused self-harm.” The release identifies the inmate as Chad Isaak.

In Aug. 2021, Isaak was convicted of killing four people at RJR Maintenance and Management in Mandan. He was sentenced to four life sentences for the deaths of Lois Cobb, 45, William Cobb, 50, Robert Fakler, 52, and Adam Fuehrer, 42.

Defense attorneys for Isaak filed an appeal to his conviction in June, according to the Associated Press.