Baltimore County Police arrested Subhan Zaib on June 15 for an alleged rape that happened one day earlier in a wooded area behind some shops in Dundalk, Maryland. 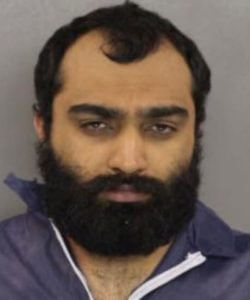 A woman told police she was walking to a bus stop after shopping at a Family Dollar store when a man approached her in front of a Walgreen’s and asked for a cigarette lighter.

As the victim looked inside her purse to get a lighter, the man pulled a knife and put it against the woman’s back ordering her to walk with him.

The two went behind a building in the block, where the suspect ordered the victim to strip before raping her in some nearby woods and cutting a piece of her hair with the knife.

Afterwards the suspect rummaged through the woman’s purse for money and fled.

The victim was able to provide detectives with a good physical description of the suspect and the knife he used.

Surveillance video of the area showed the suspect walking with the victim, with his hand behind her back at the time and place she’d said.

The next day, officers saw a man matching the description walk into an establishment close to where the rape had occurred.

Police identified the man as Zaib, who claimed to have just moved to the area from New York.

The clerk at this establishment told police that Zaib had purchased a knife there on the day of the rape, one that looked like the victim described.

When asked by the clerk what he did with the knife, Zaib said he had to “take care of some things,” and that he “took care of two girls and three guys.”

In an interview later that day with police, Zaib acknowledged having a knife like the victim mentioned, saying it was bloody and that he had since sold it.

He also confirmed getting a light and cigarette from a woman the previous night. Zaib said he preferred Marlboro Red’s which is the type of cigarette found at the crime scene.

Detectives ended up making their way to Zaib’s new home in Dundalk, where they met with his father who gave permission to search inside.

Downstairs in the basement, police recovered a backpack with “New York City” written on it as well as a pair of pants, both of which Zaib was seen wearing in surveillance footage.

The victim underwent a SAFE exam at a hospital that found injuries consistent with sexual assault.

There is no word on any of the other potential victims who Zaib “took care of,” as he claimed in interviews with police.

Turns out though that NYPD had also been looking for Zaib in relation to an unprovoked attack on June 10 inside a subway stairwell on the Lower East Side of Manhattan.

Police say Zaib choked a woman from behind and slashed her multiple times on the neck and back, before fleeing. That victim is reportedly stable at a New York hospital.

This surveillance video of a man believed to be Zaib, was released by NYPD following the subway station attack.

Zaib is thought to have assaulted another woman in New York three days earlier as well.

An NYPD spokesperson confirmed that a Subhan Zaib, age 26, was the man wanted in connection to both assaults.

This story was originally published June 17, 2022 by WMAR in Baltimore, an E.W. Scripps Company.