LAWRENCE COUNTY, Tenn. (WTVF) — A jury has convicted the father of Baby Addilyn of attempted first-degree murder in the beating that nearly killed his daughter in Lawrence County, Tenn.

Now that he’s been convicted of attempted first-degree murder, he faces an additional sentence of another 25 years. 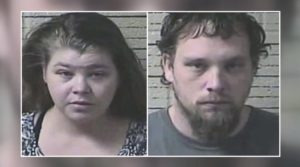 Fisher beat his infant daughter two-and-a-half years ago. Addilyn was left blind and with brain damage.

Her loving, adoptive mother, Terra Woodard, took the stand at trial and through tears explained the physical challenges facing Addilyn the rest of her life because of the injuries.

Fisher actually testified in his own defense at trial. He claimed he tripped while carrying Addilyn and fell on her, and he conceded he was very angry when she cried and beat her.

But he testified he did not want to kill her.

For attempted first-degree murder, the jury decided Fisher premeditated a plan to kill his daughter — that he wanted to kill her.

The judge will sentence the 37-year-old Fisher in November. He faces a range from 30 to 50 years.

This story was originally published September 1, 2021, by WTVF in Nashville, an E.W. Scripps Company.