ROCKCASTLE COUNTY, Ky. (WLEX) — A man once convicted of double murder but let out of jail early is in trouble with the law again.

Brett Whittaker was granted one of then-Governor Matt Bevin’s controversial end-of-term pardons. The former governor called Whittaker a “new man” who had transformed in prison. 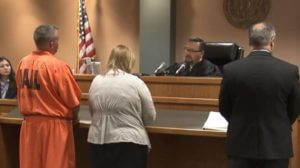 Kentucky man pardoned by the former governor for a fatal DUI has been arrested again on drug charges and driving under the influence of alcohol.

But on Monday, Whittaker was back in front of a judge, appearing virtually from the Rockcastle County Detention Center.

He was arraigned on five charges, including: possession of a controlled substance first degree (methamphetamine), operating a motor vehicle under the influence of alcohol, and possession of a handgun by a convicted felon. Whittaker pleaded not guilty in court.

According to his arrest citation, staffers inside a Mount Vernon Pizza Hut reported that a man was sitting in a truck in the parking lot for two hours. When police arrived, they say Whittaker was passed out in the driver’s seat while the truck was still in drive.

Officers say when Whittaker woke up, his eyes were bloodshot, and that they found a pill container with several large rocks of suspected meth.

Police also say there was a handgun in the next seat and charged him with possession of a handgun by a convicted felon.

According to the citation, a search on CourtNet found that he had a Pulaski County case connecting him to an indictment for Persistent Felony Offender. The county attorney advised officers that that was ground for an arrest for possession of a handgun by a convicted felon.

Whittaker questioned this charge in court, and also the night that he was arrested. When asked about his felony status, he told police and the court that he had been pardoned by former Governor Bevin.

Back in 2019, Whittaker was in the middle of a 20-year sentence after pleading guilty to a double murder. He was accused by police of driving drunk and hitting and killing John and Lavada Rowland. Whittaker was on shock probation at the time of his arrest.

Less than nine years later after Whittaker pleaded guilty, the former governor commuted his sentence and granted a full and unconditional pardon.

The order acknowledged Whittaker acted in a “criminally negligent manner” but that he had “utilized the past nine years in prison to transform his life spiritually, emotionally, and psychologically.”

But now, Whittaker is facing felony charges connected to driving once again.

His next court date in Rockcastle County is January 31. Bond was set at $10,000 cash. If he is able to pay the bond, the county attorney’s office requested random drug screenings to be a condition upon his release.

We have also learned that a man named Brett Whittaker, with the same birth date, has a separate ongoing court case in Pulaski County, where he was indicted for a felony of theft by deception.

A search through CourtNet also reveals a few speeding violations.

This story was originally published Jan. 24, 2022 by WLEX in Lexington, Kentucky, an E.W. Scripps Company.