MONTARA, Calif. (AP) — The driver of a car that plunged off a cliff in Northern California, seriously wounding two children and a second adult after the 250-foot drop, was arrested on suspicion of attempted murder and child abuse, the California Highway Patrol said Tuesday.

Dharmesh A. Patel of Pasadena will be booked into San Mateo County Jail after he’s released from a hospital, the highway patrol said in a statement. It wasn’t immediately known if Patel has an attorney. 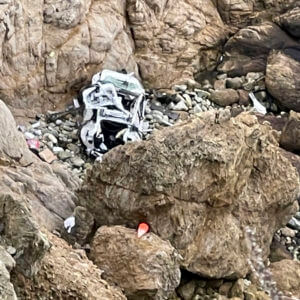 FILE – This image from video provided by San Mateo County Sheriff’s Office shows a Tesla vehicle that plunged off a Northern California cliff along the Pacific Coast Highway, Monday, Jan. 2, 2023, near an area known as Devil’s Slide, leaving four people in critical condition, a fire official said. The driver of the Tesla that plunged off a cliff in Northern California, seriously wounding two children and a second adult, intentionally caused the crash and has been arrested on suspicion of attempted murder and child abuse, the California Highway Patrol said Tuesday, Jan. 3, 2023. (San Mateo County Sheriff’s Office via AP, File)

“CHP investigators worked throughout the night interviewing witnesses and gathering evidence from the scene,” the highway patrol statement said. “Based on the evidence collected, investigators developed probable cause to believe this incident was an intentional act.”

Patel, 42, was in the car with a 41-year-old woman, a 7-year-old girl, and a 4-year-old boy, according to court documents cited by CBS News. It was not immediately clear if they were all members of the same family.

However, Patel is a doctor in radiology at Providence Holy Cross Medical Center in the Mission Hills area of Los Angeles, and a statement released by the hospital on Tuesday indicated that members of his family were in the car.

“Providence Holy Cross Medical Center is deeply saddened to learn of a traffic incident involving one of our physicians and his family,” said the statement, which was reported by KABC-TV. “We are extremely grateful there were no serious injuries. We will not respond further, as this incident is under investigation.”

Officials said it was a miracle the four survived after the car tumbled down a notorious cliffside along the Pacific Coast Highway near an area called Devil’s Slide that’s known for fatal wrecks.

The Tesla sedan plummeted more than 250 feet (76 meters) from the highway and crashed into a rocky outcropping. It appears to have flipped a few times before landing on its wheels, wedged against the cliff just feet from the surf, Brian Pottenger, a battalion chief for Coastside Fire Protection District/Cal Fire, said Monday

Crashes along Devil’s Slide, a steep, rocky and winding coastal area about 15 miles (24 kilometers) south of San Francisco that’s between Pacifica and Montara, rarely end with survivors. On Monday, the victims were initially listed in critical condition but all four were conscious and alert when rescuers arrived.

“We go there all the time for cars over the cliff and they never live. This was an absolute miracle,” Pottenger said Monday.

There was no guardrail at the spot where the sedan went off the cliff, officials said.

Witnesses called 911 around 10:15 a.m. Monday and the crews set up rope system from the highway to lower firefighters down the cliff, the battalion chief said. At the same time, other firefighters watching the sedan through binoculars suddenly noticed movement — a sign that at least one person was still alive. 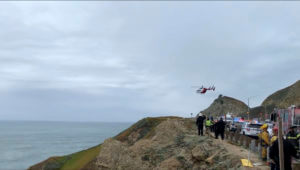 FILE – This image from video provided by Cal Fire San Mateo, Santa Cruz Unit, emergency personnel respond to the scene after a Tesla plunged off a cliff along the Pacific Coast Highway, Monday, Jan. 2, 2023, in Northern California, near an area known as Devil’s Slide, leaving four people in critical condition, a fire official said. The driver of the Tesla that plunged off a cliff in Northern California, seriously wounding two children and a second adult, intentionally caused the crash and has been arrested on suspicion of attempted murder and child abuse, the California Highway Patrol said Tuesday, Jan. 3, 2023. (Cal Fire San Mateo – Santa Cruz Unit via AP, File)

The incident turned from what had been likely a recovery of bodies to a rescue operation that took several hours amid constant rain, heavy winds, slick roads and crashing waves. The doors were smashed against the cliff and jammed shut, so firefighters were forced to cut the victims out of the car using the so-called “jaws of life” tools.

Crews pulled the kids out of the back window and brought them up the cliff by hand in a rescue basket using the rope system. They were rushed to the hospital by ambulance with musculoskeletal injuries.

The adults had traumatic injuries, however, and had to be hoisted up the cliff by a helicopter. They were then both flown to the hospital, the battalion chief said.

In 2018, a woman intentionally drove off another Northern California cliff in an SUV with her wife and their six adopted children, investigators said. All were killed. The crash in Mendocino County happened just days after authorities in Washington state opened an investigation following allegations that Jennifer Hart’s children were being neglected.