OLYMPIA (Court TV) — A Washington state teen who was the center of a missing person case is now accused of murdering his mother’s ex-boyfriend.

16-year-old Gabriel Davies was reported missing Aug. 31 in Olympia. He was supposed to be at football practice when his empty truck was found with “exterior damage” and “suspected blood,” according to an affidavit. His smashed cellphone was also found nearby. Hours later, Davies was located and authorities uncovered a twisted tale of events.

While conducting the missing person investigation, Davies’ family told authorities that he and his friend, 16-year-old Justin Yoon, had been camping with others in Mason County in the days before. During that trip, they reportedly left their cabin “on Aug. 28, a little after midnight, and returned at about 6:30 a.m.” They then left again around 11:45 a.m. and did not come back.

Meanwhile, the body of a 51-year-old man shot and stabbed to death was discovered in Orting. The victim’s body was found Sept. 1 during a welfare check, but home surveillance footage suggests he was killed on Aug. 28.

The victim’s employer requested a welfare check after he missed four shifts. The employer told detectives the victim used to date Davies’ mother, and felt the information was important because the teen was reported missing the day before. 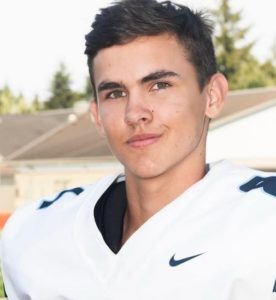 When Davies was found wandering three miles from his truck on Aug. 31, around 10:00 p.m., he was shirtless, shoeless and claimed he couldn’t remember what had happened. According to an affidavit, he later admitted to smashing his cellphone and feared “people were going to hurt him.”

On Sept. 2, the father of Davies contacted authorities and told them his son was involved in the homicide. He claimed Davies “was approached by the victim’s ‘biker buddies’ to steal something” and threatened to harm him. Davies then reportedly confided in Yoon, and the two concocted a plan “to steal the item from a safe.” Davies’ father also claimed the “biker buddies” kidnapped the teen where his truck was found on Aug. 31 and “drove him around, roughing him up before releasing him.”

A search of Davies’ home reportedly turned up two firearms stolen from the victim’s home. Both teens were arrested on multiple charges, including first-degree murder. Prosecutors say they will be charged as adults.