Taylor Rose Williams’ mother, who said her daughter disappeared from home overnight, was later charged with child neglect and giving false information to investigators, according to investigators.

Brianna Williams was absentee booked at a local hospital after being admitted because of an apparent overdose, Jacksonville Sheriff Mike Williams announced during a news conference Tuesday evening. The sheriff is not related to the family.

Earlier in the day, the team looking for missing girl found a body, according to a statement issued by police in Demopolis, Alabama.

The remains were located in a wooded area between two towns in Marengo County, located about 100 miles (160 kilometers) west of Montgomery, police said.

Authorities were working to confirm the victim’s identification.

Footage from news outlets showed multiple police vehicles parked along a dirt road in the area where authorities said remains were found. 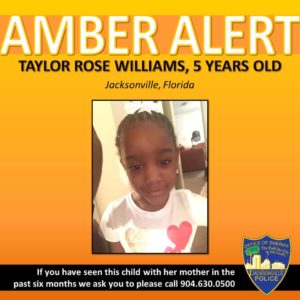 Taylor Rose Williams was reported missing by her mother from her Jacksonville, Florida, home last Wednesday. Sheriff Williams has said Taylor’s mother hasn’t spoken with investigators since that day.

News outlets reported Brianna Williams told police she last saw the child in her bed the about midnight, and an exterior door was open and the girl was gone the next morning.

The mother had been staying at the Jacksonville naval air base where she works, authorities said.

Investigators issued a release Monday asking whether anyone had seen the child and her mother in a black Honda Accord between Jacksonville and Alabama within the past two weeks.

Brianna Williams is from the county in which the remains were found, according to FirstCoastNews.com .

State, federal and local authorities from Alabama and Florida assisted in the search, which included officers walking through a drainage pond near the child’s home in Jacksonville.