TAMPA, Fla. (WFTS) — Opening statements began on Monday in the double-murder trial of a Riverview man accused of killing his girlfriend and 9-year-old daughter in 2018 and trying to kill his son.

Ronnie O’Neal III, 32, is accused of killing Kenyatta Barron and Ron’Niveya O’Neal and trying to kill his son, who was eight years old at the time.

The state began its opening statement Monday by playing the 911 call Kenyatta Barron made right before midnight on May 18, 2018, to jurors.

The call goes on for roughly four minutes and Kenyatta can be heard screaming and pleading for help as she tells the dispatcher she had been shot. The state says O’Neal can be heard saying “she killed me” and “Allah Akbar.”

The state says O’Neal hunted Barron down as she hid from him in a bedroom closet. They eventually ended up at their neighbor’s front door where Assistant State Attorney Scott Harmon says O’Neal beat her to death with a shotgun.

“That’s the barrel, the tip of the barrel with a dent in it,” he said. “On her head, on this young woman’s face.”

Harmon says he then killed his daughter who had autism and couldn’t speak.

“She couldn’t beg for her life like Kenyatta Barron had been able to do,” Harmon said. “The evidence would show that Ron’Niveya was unable to say, ‘daddy stop please, daddy, please daddy stop, stop.'”

The state says O’Neal then set out to kill his son and stabbed him multiple times before setting the house on fire. When deputies arrived, the state says O’Neal’s son came out of the garage holding himself before he collapsed in the front yard.

Ronnie O’Neal III has been defending himself. He seemed extremely agitated, yelling at the jury throughout his nearly 30-minute long opening statement.

“She threatened to kill me with a knife just a few weeks before the incident and she was angry about her relationship with my other child’s mom,” he said.

O’Neal says his son is unreliable when it comes to the “actual facts” of the case because he suffers from PTSD and that he’s been coached on his responses.

That boy survived and is expected to testify against his father at some point during this case.

Jury selection took place last week with Judge Michelle Sisco presiding. Some potential jurors told the judge they have scheduling conflicts, others admitted they don’t think they can be fully impartial and some had strong opinions on the death penalty.

“I just believe that anyone who takes a life deserves to have theirs taken,” said juror 24. 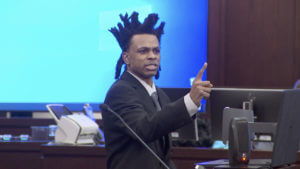 “Part of it is my Catholicism, that every human has a right to live and that their lives should not be ended any other way than naturally,” Juror 17 said.

The state says it can be challenging prosecuting a case where the defendant is representing themselves because they aren’t skilled in rules of evidence and procedure.

And there were plenty of times during jury selection where O’Neal seemed confused by the process, asking if jury selection was the official “start” of his trial. He also asked if the judge could strike Juror 24 because of his stance on the death penalty but seemed to get what the juror said incorrectly when talking to the judge.

This story was originally published June 14, 2021, by WFTS in Tampa.