Sherman was arrested July 14 after police said he crashed his SUV in a construction zone and tried to break into his in-laws’ suburban Seattle home. His father-in-law, Raymond Moss, told officers that he armed himself with a handgun and fired pepper-spray at Sherman to protect his family. 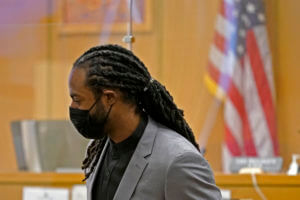 The break-in attempt was captured on the home’s surveillance camera, which was later released by the court.

Sherman, who said after the arrest he was “deeply remorseful,” pleaded guilty Monday in King County Superior Court to two misdemeanor counts, first-degree negligent driving and second-degree criminal trespass. He also admitted to a criminal infraction of speeding in a roadway construction zone.

“I’m grateful for the community we have and the way people continue to accept you even though you’re a flawed human being and made a mistake,” Sherman told the court.

Sherman, a former star with the Seattle Seahawks and San Francisco 49ers, will pay about $825 in legal fees, plus $500 for speeding in the construction zone, and be under court supervision for two years. He will be responsible for paying an as-yet-undetermined amount in restitution for damage to his in-laws’ house and to the state transportation department.

The judge gave Sherman credit for the two days he spent in custody when he was first arrested and suspended the 88 days remaining on the sentence, meaning he won’t be required to serve any additional time behind bars if he keeps out of trouble.

In an email, the King County prosecutor’s office said the resolution was in line with comparable cases.

“Mr. Sherman did not get special treatment one way or the other,” spokesman Casey McNerthney wrote.

Sherman had been belligerent, drinking heavily and had spoken of killing himself when he left his home in Maple Valley the night of July 13, according to police reports. His wife, Ashley Sherman, called 911 to try to have police stop him. He crashed in a construction zone along Highway 520 and then went to his in-laws’ home in Redmond.

Sherman, 33, became a Seattle sports legend during seven seasons with Seahawks. The cornerback was a star in their run to a 2014 Super Bowl victory, making a game-saving play to deflect a pass in the NFC championship game against the 49ers.

He is also the founder of the Blanket Coverage Foundation, a charity that provides low-income students with school supplies and clothes.