HOUSTON (AP) — A grand jury on Friday declined to indict Houston Texans quarterback Deshaun Watson following a police investigation sparked by lawsuits filed by 22 women who have accused him of sexual assault and harassment.

The grand jury’s decision came about a year after the women first filed their suits, accusing Watson of exposing himself, touching them with his penis or kissing them against their will during massage appointments. One woman alleged Watson forced her to perform oral sex. 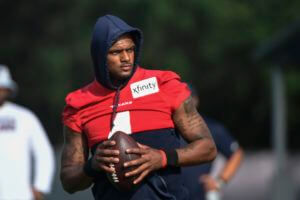 FILE – Texans quarterback Deshaun Watson (4) practices with the team during NFL football practice Monday, Aug. 2, 2021, in Houston. A judge has declined efforts by attorneys for Houston Texans quarterback Deshaun Watson to delay all his depositions in connection with lawsuits filed by 22 women who have accused him of sexual assault and harassment. During a court hearing Monday, Feb. 21, 2022, defense attorney Rusty Hardin asked that depositions be delayed until the end of a criminal investigation. (AP Photo/Justin Rex File)

Houston police began investigating Watson in April 2021 after a criminal complaint was filed. The FBI also was reviewing the allegations.

Prosecutors presented evidence and testimony to the grand jury for over six hours on Friday related to nine criminal complaints against Watson, Johna Stallings, chief of the adult sex crimes and trafficking division with the Harris County District Attorney’s Office, said.

She declined to say what possible charges were presented to the grand jury for consideration.

Watson’s lawyers have said “some sexual activity” happened during some of the massage appointments but that he never coerced anyone.

“We are delighted that the grand jury has looked at the matter thoroughly and reached the same conclusion we did. Deshaun Watson did not commit any crimes and is not guilty of any offenses,” Rusty Hardin, Watson’s lead attorney, said in a statement. 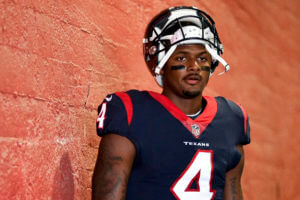 FILE – In this Aug. 25, 2018, file photo, Houston Texans quarterback Deshaun Watson prepares to take the field prior to an NFL preseason football game against the Los Angeles Rams in Los Angeles. Watson has been sued by four more women who accuse him of sexual assault and harassments. The lawsuits were filed Thursday night, March 18, 2021, hours after the NFL said it was investigating earlier allegations by three massage therapists who said the quarterback sexually assaulted them during massages. (AP Photo/Kelvin Kuo, File)

Tony Buzbee, the attorney representing the 22 women, said the criminal case is separate from the civil cases and he will continue the process of questioning Watson as the lawsuits move toward trial. Earlier Friday, Buzbee questioned Watson during a deposition, the first the NFL star has given as part of the lawsuits.

Eight of the women who sued Watson filed criminal complaints against him with Houston police and had been set to appear before the grand jury. Two other women who didn’t sue Watson also filed police complaints.

Watson’s lawyers have sought to balance their defense of the NFL star while simultaneously condemning sexual violence against women. They have called the lawsuits a “money grab” and claimed that all 22 women who sued are lying — a strategy some experts and advocates say relies on long-used tropes designed to minimize such accusations.

Buzbee has said some of his clients have faced criticism and even death threats.

Even before the lawsuits were filed in March 2021, Watson had asked to be traded. The trade request and the lawsuits kept Watson out all last season. The Texans were expected to try and trade Watson this offseason.

NFL spokesman Brian McCarthy said the league is “closely monitoring all developments” and that matter “remains under review of the personal conduct policy.”

No trial date has been set for the lawsuits.

The deposition of Watson for the civil cases took place in the offices of Hardin’s law firm, located about half a mile (0.8 km) away from the Harris County criminal courthouse in downtown Houston, where the grand jury met.

Watson invoked his Fifth Amendment right against self-incrimination during the deposition, Hardin said.

“No lawyer in America would let their client testify in a court case with the same matters being considered by a grand jury,” Hardin said.

With the criminal investigation over, “we are happy to move forward with the civil case depositions” Hardin said.

Buzbee said that Watson’s refusal to answer his questions Friday only bolstered the women’s allegations.

“If he did nothing wrong, why not just say that?” Buzbee said.

Hardin said Buzbee’s only goal on Friday was to ask Watson “salacious questions” and release transcripts to the media to make him look bad.

Hardin and Buzbee are two of the best-known lawyers in Texas. Hardin is a civil and criminal defense attorney who represented ex-pitcher Roger Clemens when he was acquitted in 2012 of charges that he lied to Congress by denying he used performance-enhancing drugs. Buzbee represented former Texas Gov. Rick Perry in an abuse-of-power case and settled lawsuits for 10 teenagers who had accused Texas millionaire Stanley Marsh 3 of paying them for sexual acts.