NEW YORK (AP) — A woman who wasn’t a fan of R. Kelly ended up getting exposed to a sexually transmitted disease after he enticed her to join him on the road, she testified on Tuesday at the R&B entertainer’s sex-trafficking trial. 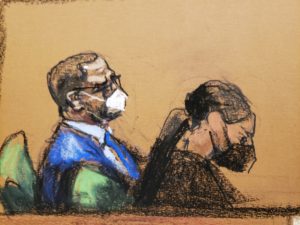 The witness, taking the stand without using her real name, said she was 19 when her older half sister invited her to a Kelly concert in San Antonio in 2017. Her sibling was a fan of his music, she said, but “I was not.”

The sisters were invited to a backstage after-party — the beginning of a brief relationship that had elements also described by other victims alleging sexual abuse by Kelly when they were still in high school. Kelly paid for woman’s flights and hotel rooms to his concerts in cities where he demanded sex from her in hotel rooms and other locations.

A prosecutor asked whether he told her he had herpes or wore condoms. “No, he did not,” she responded. Earlier in the trial — now in its third week — the jury heard Kelly’s personal physician describe treating him for herpes for several years and from another woman who claimed he gave her herpes from unprotected sex.

Kelly, 54, has repeatedly denied accusations that he preyed on victims during a 30-year career highlighted by his 1996 smash hit “I Believe I Can Fly.” His lawyers have portrayed his accusers as groupies who are lying about their relationships with him.