Kelly McCarthy, chief of police in Mendota Heights Police Department and chair of Minnesota’s Police Officers Standards and Training board, said that J. Alexander Kueng, Thomas Lane and Tou Thao were all licensed officers in Minnesota and described training every officer must receive. 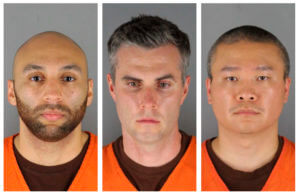 Kueng, Lane and Thao are accused of depriving Floyd, 46, of his civil rights by failing to give him medical aid while he was handcuffed, facedown with Chauvin’s knee pressed onto his neck for 9 1/2 minutes on May 25, 2020. Kueng knelt on Floyd’s back and Lane held down his legs while Thao kept bystanders back.

Kueng and Thao are also accused of failing to intervene to stop the killing, which triggered protests worldwide and a reexamination of racism and policing.

McCarthy said officers also are specifically taught to reposition someone who is restrained facedown, to ensure they can breathe. Asked why, she said, “There were enough in-custody deaths that we needed to have a learning objective on it.”

Prosecutors planned to show video from the officers’ body cameras on Friday and provide transcripts for the jury.

On Thursday, the head of the Minneapolis Police Department’s homicide unit testified that the officers should have intervened to stop Chauvin. He said that can mean intervening to begin first aid or even mean moving an officer out of the way if necessary.

Asked what Chauvin was doing that was significant to him, Lt. Richard Zimmerman, the most senior officer in the department, replied: “The knee on the neck — the officers should have intervened at that point and stopped it. … It can be deadly.”

Lane’s attorney, Earl Gray, pointed out during Zimmerman’s testimony that his client is not charged with failing to intervene.

Zimmerman, who joined the department in 1985, also testified in Chauvin’s state trial last year that resulted in murder and manslaughter convictions. 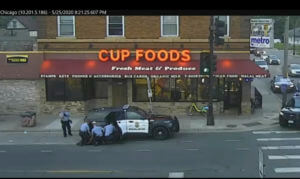 The defense has pointed out that Chauvin was the most senior officer at the scene and argued that the others were trained to obey him. Lane and Kueng were rookies, while Thao had been with the department around eight years.

But rank and seniority don’t change the duty to intervene, Zimmerman said. “We all wear the same badge,” he said.

Zimmerman also discussed his interviews with the officers immediately after Floyd’s killing.

Prosecutor Samantha Trepel, from the Department of Justice civil rights division, played a portion of Lane’s body camera video that showed Zimmerman asking Lane and Kueng and what happened. They recounted elements of their struggle to try to put Floyd in their squad car after they responded to a report of someone passing a counterfeit $20 bill.

“He kind of seemed like he was on something.. … He was fighting the whole time,” Lane says.

Zimmerman said Lane and Kueng told him nothing about having kept Floyd on the ground without rolling him over, about Chauvin keeping his knee on Chauvin’s neck, about their being unable to find a pulse, or about Lane performing CPR in the ambulance.

Trepel asked officers’ obligation to be truthful applied to the account that Lane and Kueng gave him. Zimmerman said it did.

On cross-examination, Lane’s attorney, Earl Gray, focused how Lane is seen on video calling for an ambulance and upgrading the call to lights-and-sirens as Floyd fades; asking if they should roll Floyd over and being rebuffed; and expressing concern that Floyd might be experiencing “excited delirium.”

Under cross-examination from Kueng’s attorney, Thomas Plunkett, Zimmerman acknowledged telling FBI investigators he thought poorly of Chauvin and that, “I think it’s pretty much known throughout the department that he’s a jerk.”

Zimmerman agreed that a jerk probably shouldn’t be a field training officer, as Chauvin had been to Kueng.