LAS VEGAS (AP) — O.J. Simpson and a Las Vegas hotel-casino have settled a lawsuit alleging that unnamed employees defamed Simpson by telling a celebrity news site he had been banned from the property in November 2017 for being drunk and disruptive. 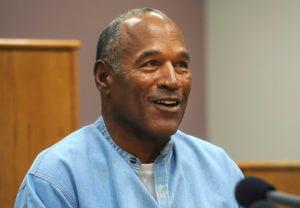 “The matter has been resolved,” LaVergne said.

Attorneys for the corporation had argued the former football star could not be defamed because his reputation was already tarnished by his criminal and civil trials in the deaths of his ex-wife and her friend in Los Angeles decades ago and his conviction and imprisonment in Nevada in a 2007 armed robbery case.

LaVergne had raised the specter of racial bias by hotel officials.

Terms were not made public in the court dismissal filed March 31 in Clark County District Court. It said both sides agreed to bear their own legal costs and fees.

Simpson, now 73, is on parole in Nevada and living in a gated golf course community following his release from prison in July 2017. He had served nine years for armed robbery, kidnapping and assault with a weapon.

His complaint against the Cosmopolitan acknowledged that Simpson was given notice, after spending several hours with two friends at a steakhouse and a lounge, that he was prohibited from returning to the property. He said he was never given a reason.

Simpson denied in his lawsuit that he was “belligerent,” broke glass or damaged property.

LaVergne said at the time his client’s reputation was damaged by accounts cited in a TMZ report that Simpson “was drunk and became disruptive” at a resort bar.

TMZ was not a defendant in the lawsuit.

Simpson went to prison after being convicted in Las Vegas in October 2008 of leading five men, including two with guns, in an ill-fated confrontation with two collectibles dealers and a go-between in a cramped room at an off-Strip casino-hotel.

Simpson always maintained he was trying to retrieve personal mementoes stolen from him following his 1995 acquittal in the killings of his ex-wife, Nicole Brown Simpson, and her friend Ronald Goldman in Los Angeles.

He said family photos and other items disappeared before he was found liable in civil court in February 1997 and ordered to pay $33.5 million to the Brown and Goldman estates.