AURORA, Colo. (AP) — One of the police officers investigated over photographs connected with the death of Elijah McClain in Colorado has resigned, Aurora police said Thursday. 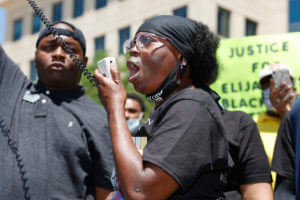 FILE – In this June 27, 2020, file photo, Sheneen McClain speaks during a rally and march over the death of her 23-year-old son Elijah McClain, outside the police department in Aurora, Colo.  (AP Photo/David Zalubowski, File)

In a tweet, the department said that Jaron Jones was one of those depicted in the photos, which were taken sometime after McClain’s death last summer. The department has not released details about what they show or said how many officers were being investigated. It said the photographs were taken near where three white officers stopped the Black man as he walked down the street and put him in a chokehold.

Jones, who has been with the department for over three years, could not be located for comment.

On Monday, interim Chief Vanessa Wilson announced the investigation into the photos and said that multiple officers had been taken off enforcement duties because of the probe.

The U.S. Attorney’s Office, the U.S. Justice Department’s Civil Rights Division and the FBI also are looking into the photos to see if they should launch a civil rights investigation.

After Aurora’s internal investigation was announced, the federal agencies also said they have been reviewing McClain’s death since last year to determine if a civil rights investigation is warranted into that as well. The Justice Department usually does not comment on investigations until they are complete, but the announcement noted that “there are specific cases in which doing so is warranted if such information is in the best interest of the public and public safety.” 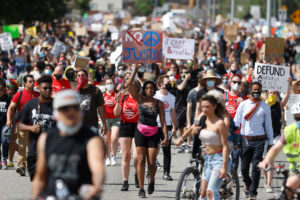 FILE – In this Saturday, June 27, 2020, file photo, demonstrators march down Sable Boulevard during a rally and march over the death of 23-year-old Elijah McClain, in Aurora, Colo. (AP Photo/David Zalubowski, File)

Three officers stopped McClain as he walked down a street last August after a 911 call reported him as suspicious. Police placed him in a chokehold, and paramedics administered 500 milligrams of sedative to calm him down. The 23-year-old suffered cardiac arrest, was later declared brain dead and taken off life support.

McClain’s death generated renewed attention after the death of George Floyd while in police custody in Minneapolis in May stirred worldwide protests over racial injustice and police brutality.