NEW YORK (AP) — An unvaccinated former Alaska Gov. Sarah Palin tested positive for COVID-19 Monday, forcing a postponement of a trial in her libel lawsuit against The New York Times.

The Republican’s positive test was announced in court just as jury selection was set to begin at a federal courthouse in New York City. 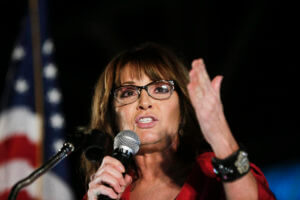 FILE – In this Sept. 21, 2017, file photo, former vice presidential candidate Sarah Palin speaks at a rally in Montgomery, Ala. Palin is on the verge of making new headlines in a legal battle with The New York Times. A defamation lawsuit against the Times, brought by the brash former Alaska governor in 2017, is set to go to trial starting Monday, Jan. 24, 2022 in federal court in Manhattan. (AP Photo/Brynn Anderson, File)

Palin claims the Times damaged her reputation with an opinion piece penned by its editorial board that falsely asserted her political rhetoric helped incite the 2011 shooting of then-Arizona U.S. Rep. Gabby Giffords. The newspaper has conceded the initial wording of the editorial was flawed, but not in an intentional or reckless way that made it libelous.

U.S. District Judge Jed Rakoff said the trial can begin Feb. 3 if Palin, 57, has recovered by then.

Palin, a one-time Republican vice presidential nominee, has had COVID-19 before. She’s urged people not to get vaccinated, telling an audience in Arizona last month that “it will be over my dead body that I’ll have to get a shot.”

When he first announced that Palin had gotten a positive result from an at-home test, Rakoff said: “She is, of course, unvaccinated.”

“Since she has tested positive three times, I’m going to assume she’s positive,” the judge said.

Rakoff said that courthouse rules would permit her to return to court Feb. 3, even if she still tests positive, as long as she has no symptoms. If she does have symptoms, she can be looked at on Feb. 2 by a doctor who provides services to the courts, he said.

On Saturday, Shawn McCreesh, a features writer for New York Magazine tweeted that Palin was seen at Elio’s restaurant on Manhattan’s Upper East Side and he quipped in a follow-up tweet: “My mom thought she was Tina Fey.” Fey was widely praised for her portrayal of Palin on Saturday Night Live when Palin was campaigning for vice president in 2008.

Luca Guaitolini, a restaurant manager, confirmed she had slipped through vaccination checks and dined at the restaurant known for attracting famous customers in violation of the city’s rule that restaurant guests must prove vaccination to be served. He said the restaurant was not making further statements.

Palin’s case survived an initial dismissal that was reversed on appeal in 2019, setting the stage for a rare instance that a major news organization will have to defend itself before a jury in a libel case involving a major public figure.

It’s presumed that Palin will be the star witness in the civil case. She’s seeking unspecified damages, saying the Times hurt her budding career as a political commentator.

Palin sued the Times in 2017, citing the editorial about gun control published after Louisiana U.S. Rep. Steve Scalise, also a Republican, was wounded when a man with a history of anti-GOP activity opened fire on a Congressional baseball team practice in Washington.

In the editorial, the Times wrote that, before the 2011 mass shooting that severely wounded Giffords and killed six others, Palin’s political action committee circulated a map of electoral districts that put Giffords and 19 other Democrats under stylized crosshairs.

The disputed wording had been added to the editorial by James Bennet, then the editorial page editor. At trial, a jury would have to decide whether he acted with “actual malice,” meaning that he knew what he wrote was false, or with “reckless disregard” for the truth.

In pretrial testimony, Bennet cited deadline pressures as he explained that he did not personally research the information about Palin’s political action committee before approving the editorial’s publication. He said he believed the editorial was accurate when it was published.
___
Associated Press Writer Larry Neumeister contributed to this story